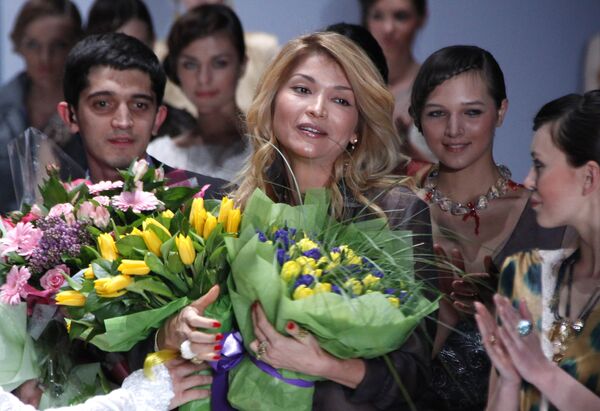 Her father, President Islam Karimov, strictly regulates the entertainment industry in the country of 29 million by banning films, pop music and books deemed unpatriotic or harmful for young people. His government promotes works of art that celebrate Uzbekistan’s uniqueness and independence.

One such work is “The History of the Jewel of the Orient (My Dear Motherland),” a song by a fledgling Uzbek starlet who goes by the name Tatyana Ocean. The song’s music video was posted on YouTube last week with a note that says, “the [music] clip was made for Independence Day,” which is celebrated in Uzbekistan annually with lavish shows broadcast live on Uzbek television on September 1.

But to Gulnara Karimova, who has released two pop albums and several music videos under the name Googoosha and published a book of poetry, the song and video offer nothing but plagiarism and “pathetically stupid” lyrics.

“Listen to her song about Uzbekistan tailored for her good vocals, and you will her another [performer’s] intro, a stolen rhythm and a pathetically stupid text with an opportunistic approach to the independence celebration!” she wrote in a message posted on the microblogging site Twitter on Wednesday.

“It’s total nonsense! And everyone keeps mum! Where are the music critics?” she rhetorically asked in other tweets. “It’s so sad that it hurts!”

Karimova is not alone in harshly criticizing the quality of the ex-Soviet nation’s artists. In June, Uzbekistan’s culture agency, Uzbeknavo, banned several pop singers and bands from performing live due to “meaningless” songs that failed to “praise the motherland.” Seven more performers got off lightly with “harsh warnings” and were told that they had until July 1 to “eliminate creative shortcomings,” the agency said.

Other Uzbek artists have faced more than bans and warnings for contradicting the official viewpoint. Popular folk singer Dadakhon Khasanov, who penned a song about the government’s violent crackdown on a popular uprising in 2005, was given a three-year suspended prison sentence in 2006 and has not been allowed to perform in Uzbekistan since.

Filmmaker and photographer Umida Akhmedova was convicted of slander and “offense through mass media” in 2010, but was released on amnesty, she said at the time. Her film, "The Burden of Virginity," describes hardships young women face in the mostly Muslim nation during and after the traditional nuptial ceremonies, including the public demonstration of a bloodstained bedsheet after the first night.

The 41-year-old Karimova, a Harvard graduate and divorced mother of two, has purportedly created a business empire that includes a telecoms company, cement factories, gas stations, nightclubs and several media outlets, according to news reports.

The West ostracized her father after his troops opened fire in 2005 on thousands of mostly peaceful protesters in the eastern city of Andijan who were urging the authorities to release 23 local businessmen awaiting trial on what the protesters called trumped-up charges.

Uzbek authorities said 187 people were killed, mostly by armed protesters. Survivors and human rights groups said that at least 750 were gunned down by government troops.