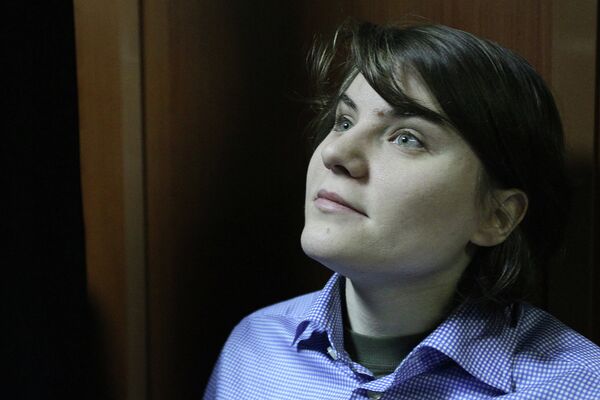 A member of Russian punk band Pussy Riot has sued her former lawyer for libel and is seeking 2 million rubles ($61,000) in damages, a Russian court said Tuesday.

Yekaterina Samutsevich wants her former attorney Violetta Volkova to refute what she claims is a libelous statement that “negatively characterizes her personality, degrades her honor and dignity,” according to a statement by the Elektrostal city court in Moscow Region posted on the court’s website.

Samutsevich and fellow band members Nadezhda Tolokonnikova and Maria Alyokhina were sentenced to two years in jail last August for their February 2012 “punk prayer” in Moscow’s largest cathedral after an internationally condemned trial. The band members, who were represented by Volkova and two other lawyers, rejected the hooliganism charges as “absurd” and “illegal.”

Samutsevich later fired Volkova and hired a new attorney, who maintained her client did not actually participate in the prayer because security guards at the Christ the Savior cathedral had prevented her from joining the other two from “praying” near the altar. After an appeal hearing last October, Samutsevich had her jail term reduced to a suspended sentence and was released in the courtroom.

Volkova has accused Samutsevich of “striking a deal” with prosecutors and betraying other band members by admitting that the “prayer” was a crime that she could not take part in. “First of all, this is a deal with [her] conscience,” Volkova wrote in January in her blog on the website of Ekho Moskvy radio. “This is the kind of deal that saved only one of the participants but drowned the others.”

As part of her libel action, Samutsevich wants Volkova to refute her comments and remove them from the Internet, the Elektrostal court statement said. A preliminary court hearing is scheduled for September 18, it said.

“Let her have fun,” Volkova responded, in a message posted on the microblogging site Twitter.

“2 million will satisfy her appetite, I think,” she said in another tweet. “At least, for now.”