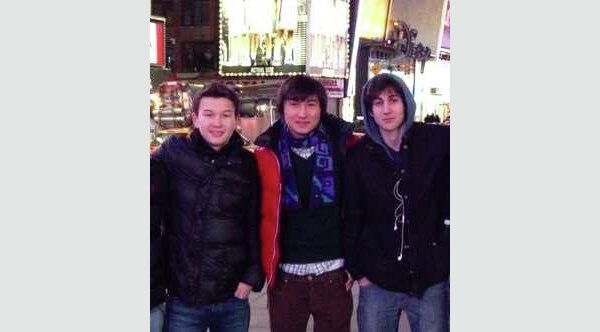 Two college friends of Boston Marathon bombing suspect Dzhokhar Tsarnaev pleaded not guilty in federal court in Boston Tuesday to charges they impeded the investigation into the April 15 attack by allegedly disposing of items they found in Tsarnaev’s dorm room at the University of Massachusetts-Dartmouth.

WASHINGTON, August 13 (RIA Novosti) – Two college friends of Boston Marathon bombing suspect Dzhokhar Tsarnaev pleaded not guilty in federal court in Boston Tuesday to charges they impeded the investigation into the April 15 attack by allegedly disposing of items they found in Tsarnaev’s dorm room at the University of Massachusetts-Dartmouth.

Wearing orange prison jumpsuits, with their hands cuffed behind their backs, Dias Kadyrbayev and Azamat Tazhayakov, both students from Kazakhstan, pleaded not guilty to obstruction of justice charges for allegedly removing several items from Tsarnaev’s room days after the Boston bomb attacks, in which three people were killed and more than 260 injured.

Prosecutors allege that Kadyrbayev received a text message from Tsarnaev, asking him to go to the dorm room and “take what’s there,” the US Attorney’s Office for the District of Massachusetts said in a statement last week, when the two Kazakh students were indicted.

The text message was allegedly sent the day the FBI released images of Tsarnaev and his older brother, Tamerlan, and said the siblings were suspected of carrying out the marathon bombings.

“Kadyrbayev, Tazhayakov and another conspirator… went to Tsarnaev’s dormitory room and removed several items, including Tsarnaev’s laptop computer and a backpack containing fireworks, and brought them to Kadyrbayev and Tazhayakov’s apartment in New Bedford,” the statement says.

Investigators later found the items at a landfill in the town of New Bedford.

Attorney Robert Stahl, who is representing Kadyrbayev, told Boston television station WBZ before the hearing that the two students “had no idea Dzhokhar was involved” in the bomb attack.

Tazhayakov's father, mother, brother, sister and cousin were sitting in the front row watching the proceedings in court on Tuesday. His father, who has been in the Boston area since April 25, shortly after his son's arrest, said through an interpreter after Tuesday's hearing that he believes the FBI made a mistake in arresting his son and that the court will figure that out.

One of Tazhayakov's lawyers, Arkady Bukh, said the student was questioned for days without an attorney, and "feels this is a witch hunt."

Dzhokhar Tsarnaev, 19, was captured by police four days after the marathon bombings and has pleaded not guilty to all the charges against him, including murder and the use of a weapon of mass destruction. He faces the death penalty.

His older brother, Tamerlan, died during a shootout with police, hours before Tsarnaev was captured.