Kremlin's Man Bails Out of Debate in Moscow Mayoral Race 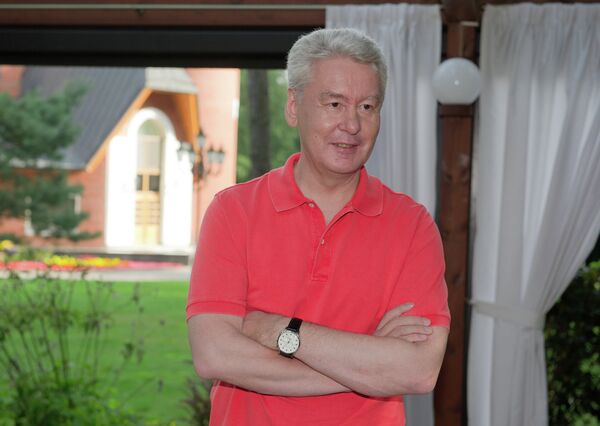 © RIA Novosti . Denis Grishkin
/
Go to the photo bank
Subscribe
Acting Moscow Mayor Sergei Sobyanin would not debate his five rivals in public ahead of mayoral elections in the city, his campaign representative said Saturday.

MOSCOW, August 10 (RIA Novosti) – Acting Moscow Mayor Sergei Sobyanin would not debate his five rivals in public ahead of mayoral elections in the city, his campaign representative said Saturday.

“Sobyanin…would not participate in debates, focusing instead on direct interaction with the voters,” Lyudmila Shvetsova told journalists.

She did not say what prompted the decision. Media claimed last month that Sobyanin, an old Kremlin hand, was reluctant to face off against firebrand opposition leader Alexei Navalny, known for his scathing attacks on the Russian ruling establishment, which he accuses of corruption.

Navalny reported earlier this week that Sobyanin's underage daughter owns a large apartment in a prestigious building in central Moscow that the family could not afford on income they specified in their publicly disclosed income declarations.

The Kremlin said the apartment was granted to Sobyanin, a native of the Siberian Tyumen Region, during his tenure at the presidential administration in the 2000s, but opposition activists still questioned the legality of the boon.

Elections in Moscow will take place on September 8. The debates are set to begin Monday and will be broadcast live on radio and television channels owned by the city, which has a population of 12 million.

Navalny and the other four opposition candidates blasted last month Sobyanin’s reported reluctance to debate, in which the acting Moscow mayor follows his political patron, President Vladimir Putin, who never debated any rivals during his three successful presidential campaigns in 2000-2012.