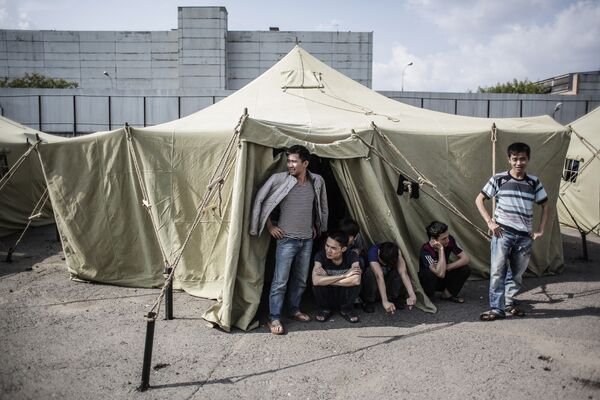 © RIA Novosti . Andrey Stenin
Subscribe
A Russian health watchdog said Friday it had found minor violations of the hygiene and sanitation regulations at a detention camp set up in Moscow to house recently detained illegal immigrants.

MOSCOW, August 9 (RIA Novosti) – A Russian health watchdog said Friday it had found minor violations of the hygiene and sanitation regulations at a detention camp set up in Moscow to house recently detained illegal immigrants.

Rospotrebnadzor, Russia’s consumer safety and health regulation watchdog, said in a statement Friday that cases of infectious diseases were not registered during an inspection at the camp housing about 600 people, mostly from Vietnam. They were rounded up last week in a series of police raids targeting illegal immigrants.

“In course of the inspection, a range of violations of sanitation and hygiene regulations in food and living conditions were found,” the watchdog said, adding that general conditions appeared to be fine.

Russian media reports Thursday said some two dozen detainees allegedly had chickenpox, but there has been no official confirmation.

The Human Rights Watch non-governmental organization claimed 30 of the camp’s inmates had been hospitalized “due to severe skin rash and allergies of unknown origin.”

Human Rights Watch also issued a statement on Friday calling for the Russian government to stop the continuing raids targeting immigrants and their poor treatment.

“Nothing can justify massive detentions based on ethnic profiling,” said Tanya Lokshina, Human Rights Watch Russia’s program director, in a statement. “If the authorities are serious about improving security and public order in Moscow, they should focus on fighting crime and stop trying to divert public discontent by using migrants as scapegoats.”

The Moscow camp inmates are among over a thousand immigrants detained in police raids since last week. Officials said they had to set up the tented camp as an emergency measure as the permanent centers for detained foreigners were full.

The inmates are now waiting for the courts and migration authorities to decide on their deportation.

Meanwhile, the Investigative Committee said Friday that a senior official from the Federal Migration Service’s Moscow branch is suspected of abusing his office by taking part in assisting illegal immigration. According to investigators, the official helped to some 600 illegal migrants to avoid inspections by the migration service.