5 Years After War, Russians Warm Up to Georgia – Poll 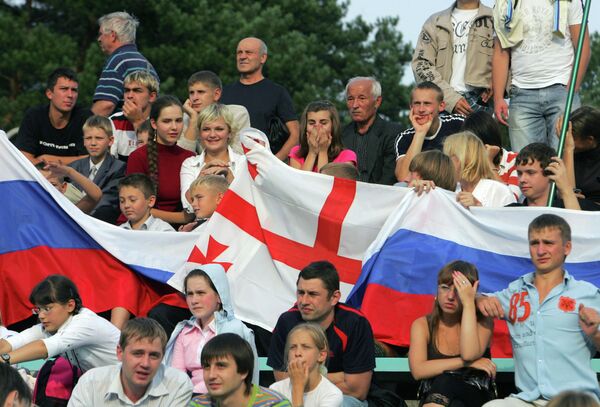 Nearly half of Russians harbor “mostly good” or “very good” feelings toward Georgia according to a new poll, a threefold rise from five years ago when the two countries fought a brief war over a breakaway Georgian region.

NB: This article was corrected on August 8. The original version mistakenly stated that Russia had granted South Ossetia and Abkhazia independence, when independence was not Russia's to grant; Moscow recognized the two as independent. Other clarifications have been added throughout.

MOSCOW, August 7 (RIA Novosti) – Nearly half of Russians harbor “mostly good” or “very good” feelings toward Georgia according to a new poll, a threefold rise from five years ago, when the two countries fought a brief war over a breakaway Georgian region.

Russia routed Georgian forces in just five days during the August 2008 conflict and subsequently recognized the region, South Ossetia, as independent, along with the nearby breakaway Georgian province of Abkhazia.

Relations between Moscow and Tbilisi were severely damaged by the conflict, with the two countries cutting diplomatic ties and Georgia pulling out of the Commonwealth of Independent States, a loose grouping of former Soviet republics.

Kremlin-friendly media have emphasized the suffering of South Ossetia's civilian population due to the conflict – in which Georgia is widely believed to have fired the first shots – and, at the time of the fighting, portrayed the country’s Western-leaning president, Mikheil Saakashvili, as a mentally unstable war criminal.

Five years later, 44 percent of Russians feel “mostly good” and 4 percent “very good” about Georgia, according to a survey published Wednesday by the Levada Center, an independent Russian pollster.

In September 2008, only 15 percent and 1 percent, respectively, felt that way, the pollster said.

More than 40 percent of respondents in this year's poll said South Ossetia and Abkhazia should be independent nations. The regions broke away from the central Georgian government during armed conflicts in the early 1990s and their status has been up in the air ever since. Most of the regions' residents have received Russian citizenship and Moscow has provided South Ossetia with billions of rubles in financial support since the war, according to official regional statistics published this week in the Moscow-based Kommersant daily.

Forty-nine percent of this year's respondents said Moscow’s recognition of the two regions as independent, a precedent followed by only a handful of countries, has neither benefited nor harmed Russia. Only 28 percent thought that way in 2008, with 40 percent believing then that the move had been good for Russia – a position held by only 20 percent in 2013.

About 70 Russian troops and 160 South Ossetians were killed during the brief war, Moscow said at the time. Tbilisi estimated its death toll at some 400.

The survey was conducted July 18-22, among 1,601 urban and rural residents aged 18 and above in 130 localities across 45 Russian regions. The statistical margin of error did not exceed 3.4 percent.