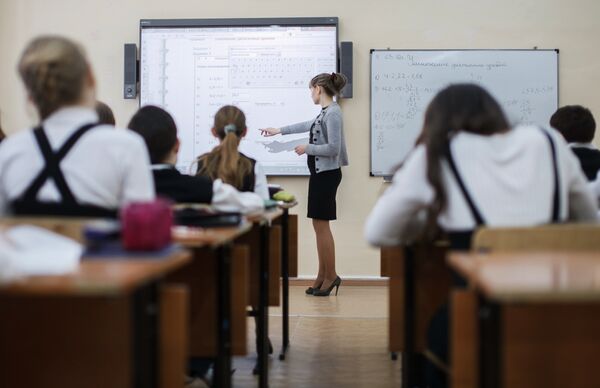 Russian lawmakers concerned about the effect on students of the “undisguised sexuality” of some schoolteachers are developing a formal behavior and dress code for schools that will ban miniskirts and plunging necklines, a Russian daily reported Monday.

MOSCOW, August 5 (RIA Novosti) – Russian lawmakers concerned about the effect on students of the “undisguised sexuality” of some schoolteachers are developing a formal behavior and dress code for schools that will ban miniskirts and plunging necklines, a Russian daily reported Monday.

The dress code, being devised by two committees in the State Duma, Russia’s lower house of parliament, will include recommendations for students and their teachers, the Izvestia daily said.

Several bills on the reintroduction of school uniforms have already been submitted to the Duma after a series of disputes between regional education officials and students over wearing symbols of their religious affiliation, such as hijabs, in schools and universities. Mandatory school uniforms were abolished in Russia in 1992.

A lawmaker with the ruling United Russia party who works for the Duma committee on family issues claimed there had been a fall in moral standards in schools, with some teachers even working in strip clubs and advertised sex services online.

“Pedagogues allow themselves to dress with undisguised sexuality and … get side jobs in strip clubs or advertise services of sexual character on the Internet,” Yelena Senatorova was quoted as saying. “This is unacceptable given that we are introducing school uniform for children.”

The dress code will not introduce uniform for teachers but will ban immoderately short skirts, exposed cleavages and excessive makeup, Senatorova told the daily.

An intern at a public school in the Volga River city of Yaroslavl worked at a strip club, and a chemistry teacher in the city of Togliatti was fined for running a brothel in her apartment, whose employees included a 17-year-old schoolgirl, the Komsomolskaya Pravda daily reported in April 2009. Both complained of low pay in their teaching posts, the paper said.

In the first quarter of 2013, a school teacher’s average salary in Russia was 26,000 rubles ($785) a month, the Education and Science Ministry said in April.

The proposed moral code will also include recommendations for interaction between teachers and students, another lawmaker told Izvestia. The code is “necessary given the current level of morality in schools,” Nadezhda Shaidenko was quoted as saying.

The deputies did not mention to Izvestia whether the code contained recommendations for male teachers.

Russian President Vladimir Putin publicly expressed his support for reintroducing uniforms in Russian schools during a question and answer session on April 25.

In early July, Russia’s Supreme Court upheld a ban on wearing Islamic headscarves at a school in southern Russia, and ruled that the ban did not violate freedom of faith or the right to education for Muslim schoolgirls. It ruled that every school has the right to decide what its students may or may not wear.

The ban on hijabs for schoolchildren in the southern Stavropol Region came into effect last September after local authorities issued a ruling requiring schoolchildren to wear uniforms.