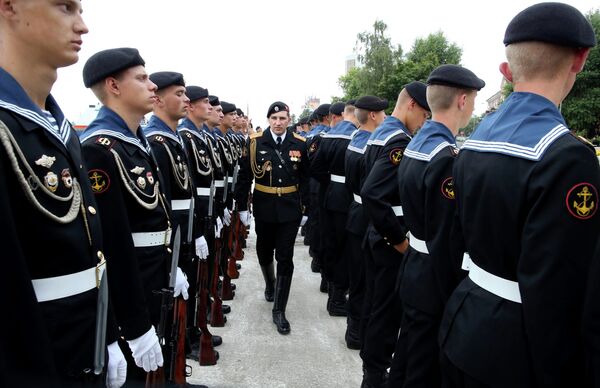 © RIA Novosti . Igor Zarembo
/
Go to the photo bank
Subscribe
Neptune, the Roman god of the sea, will reportedly no longer be appearing at Russian Navy Day celebrations because the Orthodox Church, the strongest religion in the country, has protested against pagan characters at such events.

MOSCOW, July 29 (RIA Novosti) – Neptune, the Roman god of the sea, will reportedly no longer be appearing at Russian Navy Day celebrations because the Orthodox Church, the strongest religion in the country, has protested against pagan characters at such events.

Offending religious believers is a crime in Russia since last month. Violators face up to three years in prison.

Pagan beings that were not aboard Noah’s Arc do not belong “at a celebration of an Orthodox Christian navy,” a Church representative told the armed forces branch, according to a military spokesman cited by Russian media.

Navy Day, commonly referred to as Neptune’s Day, has been celebrated on the last Sunday of July since 1939. Festivities have usually featured a costume show including the Roman god accompanied by mermaids, mermen and various imps.

But the imps were noticeably absent from Neptune’s entourage at a Pacific Fleet celebration in Vladivostok last Sunday, local news site Zrpress.ru reported.

The article linked the imps’ disappearance to recent protests by local Orthodox Christians, who opposed similar shows during Fisherman’s Day on July 14, saying it offended their religious sentiment.

The Navy’s press service, as well as that of the Russian Orthodox Church, could not be reached for comment on Monday.

The Church in recent years has been expanding its presence in many spheres of Russian life, including the military, which has recently re-allowed priests to provide services to soldiers following a near-century of absence under the Soviet Union.

The Church has also found a strong ally in the Kremlin, with President Vladimir Putin opting for an increasingly conservative domestic policy since his re-election last year.