Putin Blasts US for Intimidation in Snowden Asylum Saga 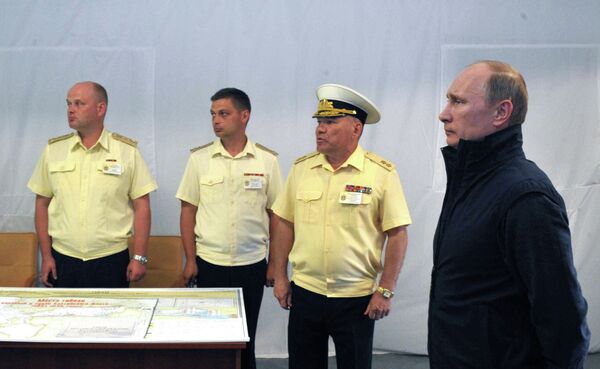 © RIA Novosti . Alexey Nikolskii
/
Go to the photo bank
Subscribe
Russian President Vladimir Putin on Monday said US intelligence leaker Edward Snowden was still in the transit area of a Moscow airport because Washington had “blocked” him there by intimidating countries that had been ready to grant him asylum.

MOSCOW, July 15 (RIA Novosti) – Russian President Vladimir Putin on Monday said US intelligence leaker Edward Snowden was still in the transit area of a Moscow airport because Washington had “blocked” him there by intimidating countries that had been ready to grant him asylum.

“He arrived on our territory without an invitation. He wasn’t flying to us. He was on a transit flight to other countries,” Putin said in St. Petersburg, adding that the United States had “intimidated other countries, [so that] nobody wants him.”

“That’s how they [the US] blocked him on our territory,” Putin said. “Some gift for us.”

Snowden, who publicized details of extensive US government surveillance programs allegedly targeting European dignitaries as well as millions of American citizens, arrived in Moscow from Hong Kong on June 23. He has since remained in geopolitical limbo in the transit zone of Sheremetyevo Airport, while trying to find a country to grant him asylum.

On Monday, Putin added that Russia would not give permanent asylum to Snowden because he refused to stop a “fight for human rights” that may strain Moscow’s ties with Washington.

The Russian leader cited Snowden as saying, “I want my work to go on. I want to fight for human rights. I think the US is breaking certain legal standards, international [rules], and is intruding into private lives. My aim for now is to fight it.”

But, according to Putin, the Russian side replied, ‘Go on without is, we have [other] things to fight for.’”

Putin had said earlier that Moscow would not extradite Snowden to the United States, where he could face the death penalty. But the Kremlin has also tried to keep its distance from the case, emphasizing that it is a human rights issue.

Last Friday, at a meeting with human rights activists in the transit area, Snowden announced his intention to apply for political asylum in Russia, adding that he was ready to comply with Moscow’s conditions, including not causing harm to the United States.

Last month, Putin said Moscow would consider granting Snowden asylum under the condition that he stop his work aimed at “damaging our American partners,” an option Snowden initially rejected, but apparently accepted after failing to secure safe passage to Latin American countries that had offered him asylum – Bolivia, Nicaragua and Venezuela.

(updates with Putin's quote on permanent asylum for Snowden)