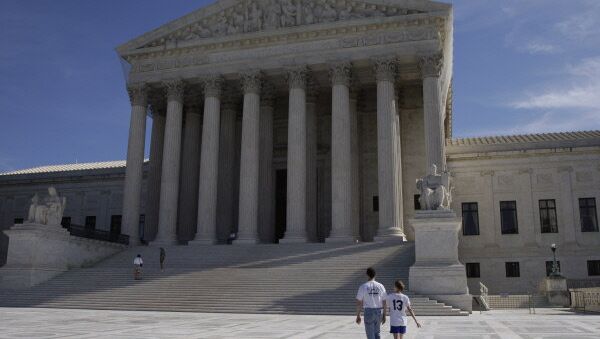 © RIA Novosti . Igor Mikhalev
Subscribe
A US privacy rights advocacy group Monday filed an emergency petition to the US Supreme Court in an effort to halt a government surveillance program that gathers information on domestic phone records of millions of Americans.

WASHINGTON, July 8 (RIA Novosti) – A US privacy rights advocacy group Monday filed an emergency petition to the US Supreme Court in an effort to halt a government surveillance program that gathers information on domestic phone records of millions of Americans.

The petition by the Electronic Privacy Information Center (EPIC) comes in the wake of leaks by fugitive former US intelligence contractor Edward Snowden about the US National Security Agency’s (NSA) secret surveillance activities targeting the communications both domestically and abroad.

“Telephone records, even without the content of the calls, can reveal an immense amount of sensitive, private information,” Marc Rotenberg, president of the Washington-based nonprofit, said in a statement.

The petition alleges that the US Foreign Intelligence Surveillance Court, a secretive body known as the FISA court that authorizes such surveillance, has “exceeded its statutory jurisdiction when it ordered production of millions of domestic telephone records that cannot plausibly be relevant to an authorized investigation.”

A top secret document leaked by Snowden to the British newspaper The Guardian last month showed that the FISA court had ordered US telephone carrier Verizon to provide the NSA with daily information about calls made by the company’s customers.

“There are no reasonable grounds for the NSA to have access to every call record of every Verizon customer,” Rotenberg said.

The Verizon revelation and subsequent leaks by Snowden about US intelligence gathering operations set of an international furor that saw the former CIA employee go into hiding as US authorities issued a warrant for his arrest on charges of leaking state secrets.

Snowden arrived in Russia on a flight to Moscow from Hong Kong on June 23. The United States has revoked his passport, and he is now believed to be holed up in the transit area of Moscow’s Sheremetyevo airport while attempting to secure political asylum in a third country.

EPIC is taking its lawsuit directly to the Supreme Court because lower US courts do not have the authority to review secret orders issued by the FISA court, the New York Times reported.

Updated to reflect the filing of the petition Monday and to include comments from EPIC president Marc Rotenberg.