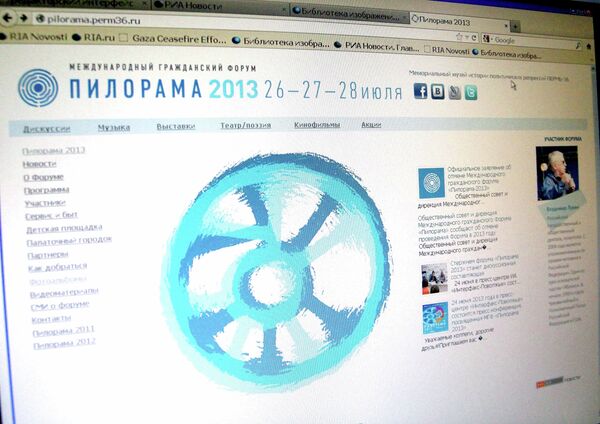 © RIA Novosti
Subscribe
A controversial Russian civic forum for political and artistic discussions held at a former Gulag prison camp has been cancelled due to budget cuts after pressure from a pro-Kremlin group, organizers said Monday.

MOSCOW, July 8 (RIA Novosti) – A controversial Russian civic forum for political and artistic discussions held at a former Gulag prison camp has been cancelled due to budget cuts after pressure from a pro-Kremlin group, organizers said Monday.

Since 2005, the Pilorama (Power-Saw Bench) forum has been held in a village outside the Urals city of Perm at a former maximum-security prison for political prisoners, where some of the most outspoken Soviet dissidents served time until 1988.

The almost-intact camp was turned into a museum that hosted the two-day forum of human rights activists, politicians, artists and rock musicians from a dozen countries. Co-funded by the Perm authorities, the forum became a prominent venue for debate on Russian politics and art and attracted thousands of visitors.

Pro-Kremlin neo-conservative group Sut Vremeni (The Essence of Time) has repeatedly urged the Perm authorities to stop funding the forum that it said served as “an ideological NATO base” in Russia and was “aimed at destabilizing the political situation” in the country.

Since the mid-2000s, the authorities of the oil-rich industrial region have promoted Perm as “Russia’s culture capital” and lavishly funded music and theater festivals, art exhibitions and museums.

But the forum’s main organizer said Monday that this year’s gathering was canceled after the Perm authorities cut their $150,000 grant by 50 percent.

“Everything was ready for the forum, and the decision to cut the budget by half was a complete surprise,” Viktor Shmyrov said in a statement posted on the forum’s website. “Only now do we realize how special the conditions Perm lived in for several years were.”

Perm regional culture minister Igor Gladnev said that he initiated the cut as an “worthwhile and effective” tool for balancing the budget, the Kommersant daily reported Monday.

Guelman was fired by culture minister Gladnev in mid-June after an exhibition that satirized the upcoming 2014 Winter Olympics in Russia’s Black Sea resort of Sochi.

Protest artists have fallen foul of the law in Russia frequently in recent years, amid what they claim is a Kremlin-driven campaign to promote traditional values and silence critics.

Several criminal investigations have been opened against artist Artyom Loskutov for allegedly inciting religious hatred with his “icons” on T-shirts and billboards portraying Pussy Riot members as Holy Mary and Orthodox saints.

In 2010, two art curators in Moscow were convicted and fined for their 2007 art exhibition that included images of Jesus Christ depicted as Mickey Mouse and Soviet leader Vladimir Lenin. The exhibition was closed after militant Orthodox activists stormed in, damaging some of the exhibits.