Iconic Volgograd Statue Could Collapse At Any Time - Expert 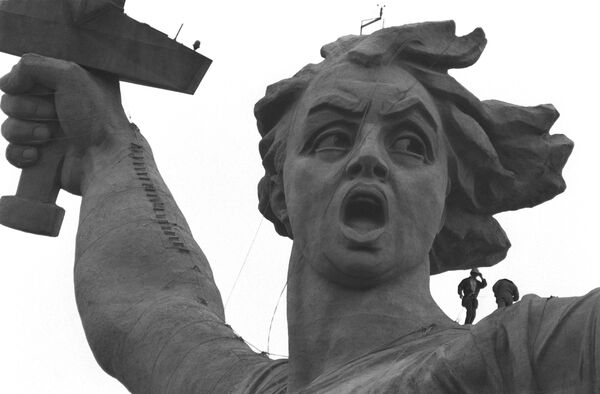 © RIA Novosti . Vitaly Arutyunov
/
Go to the mediabank
Subscribe
International
India
Africa
One of Russia’s most iconic war memorials, the Motherland Calls statue in Volgograd, is badly in need of rebuilding work and is so unstable that it could collapse at any time, according to sculptor and restorer Vadim Tserkovnikov.

MOSCOW, July 6 (RIA Novosti) – One of Russia’s most iconic war memorials, the Motherland Calls statue in Volgograd, is badly in need of rebuilding work and is so unstable that it could collapse at any time, according to sculptor and restorer Vadim Tserkovnikov.

The 85 meter high concrete structure, which stands on the banks of the Volga River, is seriously cracked and sways from side to side because of its unstable foundations, Tserkovnikov said in an interview published in the Moskovsky Komsomolets newspaper on Friday.

Motherland Calls was built near to the site of the battle of Stalingrad, the former name of Volgograd, which took place over the winter of 1942 to 1943 and was one of the key turning points of World War Two. Up to two million people were killed in the bitter house-to-house fighting between Nazi forces and the Soviet Union's Red Army.

The Battle of Stalingrad: Archive Photos

The enormous statue, unveiled in 1967, took eight years to build, and shows a woman in flowing robes with a sword in one hand looking over her shoulder and exhorting those behind to follow.

“The defensive concrete layer of the Motherland Calls is almost destroyed,” said Tserkovnikov. “And if you could only see how patched-up the surface is: chunks have fallen off, and they’ve only plastered over [the holes] with mortar.”

But a more serious problem appears to the inadequate foundations that cause the statue to sway from side to side, and mean it could fall down at any moment, according to Tserkovnikov, who also worked on the restoration of the famous Worker and Woman Kolkhoznik statue that stands outside of Moscow’s All Russian Exhibition Center.

“How was it possible to place such a large structure, with a weight of about 8,000 tons, on foundations of a solid layer of clay?” Tserkovnikov asked.

Motherland Calls was designed by architect Yevgeny Vuchetich and was for a few years the largest such statue in the world. Its degradation is being accelerated by Volgograd’s harsh winter climate, and the relatively rapid weathering of the concrete that was used in its construction.

“Today we can only halt the process of the destruction of the concrete,” said Tserkovnikov, adding that a “big sum” would be required for a comprehensive restoration programme that would need to include the replacement of the huge concrete sword. He did not give a precise figure.

A report about the critical state of the statue has been sent to Culture Minister Vladimir Medinsky, according to Tserkovnikov.