US Might Also Be Spying on Russian Diplomats – Putin 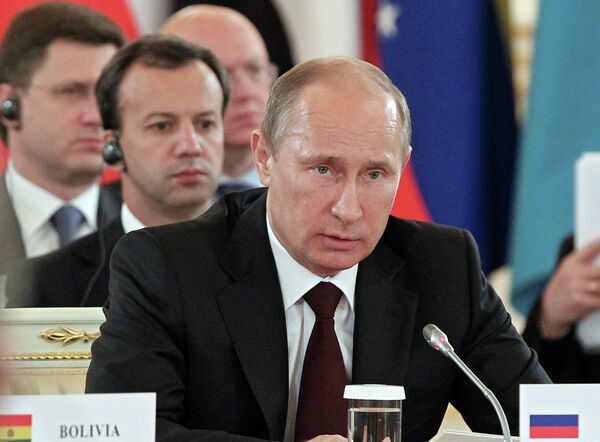 “These reports contain no information about attempts to wiretap Russia’s official missions [in the US]. I do not rule out that this is possible. We used to have evidence of it in the past,” the Russian president said. “But, in fact, we have no reliable information about who wiretapped whom and for what reasons.”

“The fact that the allies are eavesdropping on each other is not our business. Let them do what they want,” he said. “Let our [US and EU] colleagues decide between themselves who is guilty, who is not and what should be done about it.”

Many EU states have earlier requested explanations from Washington about media reports that US special services wiretapped telephone communications and infiltrated computer networks in EU offices in Washington and New York.

Germany’s Der Spiegel magazine said on Sunday, also citing “secret documents” obtained by Snowden, that bugs were installed in its office in Washington, allowing “access to discussions in EU rooms as well as emails and internal documents on computers.”

Chancellor Angela Merkel's spokesman, Steffen Seibert, said Monday that Berlin felt surprised and "alienated" by the reports. He said his country would seek an explanation and, if necessary, a “single and unambiguous reaction” from the EU.

"If it is confirmed that diplomatic representations of the European Union and individual European countries have been spied upon, we will clearly say that bugging friends is unacceptable," Reuters quoted Seibert as saying. "We are no longer in the Cold War."

The US ambassador in Berlin was “invited” for discussions with a senior official on Monday afternoon, German foreign ministry spokesman Martin Schaefer said. He also said that German Foreign Minister Guido Westerwelle would raise the issue in a conversation with EU foreign policy chief Catherine Ashton later in the day.

French President Francois Hollande demanded that the United States “immediately stopped” the alleged surveillance, adding that his country "cannot accept this kind of behavior from partners and allies."

"There can be no negotiations or transactions in all areas until we have obtained these guarantees, for France but also for all of the European Union, for all partners of the United States," Agence France-Presse quoted the president as saying.

French Foreign Minister Laurent Fabius was to discuss the situation in a phone conversation with US Secretary of State John Kerry later in the day.

“There can be no justification on the grounds of security for spying on diplomats and diplomatic representations of friendly countries,” the French Ministry of Foreign Affairs quoted him as saying.

Italian Defense Minister Mario Mauro suggested that the affair, if proven to be true, could force the EU to take a bold unified position. "Perhaps for the first time we'll see if such a thing as European foreign policy exists. Europe tends to grow up when its back is to the wall," Italian media quoted him as saying.

US President Barack Obama, who is currently on a visit to Tanzania, sought do defend the US surveillance program and ease growing tensions by saying that it's no surprise that governments spy on each other and that Europeans probably spied on him too. He said that his country would provide all the information that his European allies are asking for in connection with the accusations and assured that if he wanted to know what a European leader was thinking, he would call that person himself.