Snowden Can Stay but Must Stop Harming US – Putin 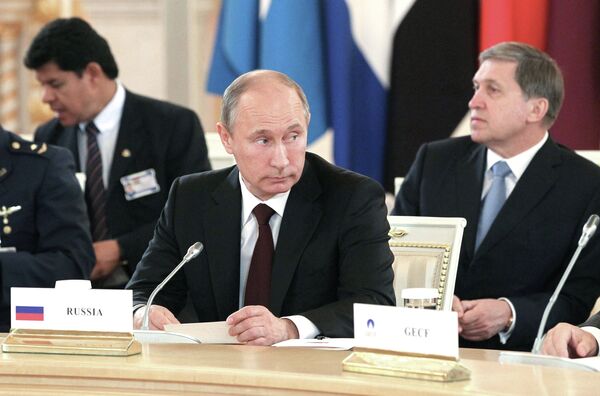 © RIA Novosti . Mikhail Klimentyev
/
Go to the photo bank
Subscribe
Russian President Vladimir Putin said Monday that fugitive former US intelligence contractor Edward Snowden could stay in Russia, if he wanted to, but must stop leaking secrets and doing other activities to harm the United States.

MOSCOW, July 1 (RIA Novosti) – Russian President Vladimir Putin said Monday that fugitive former US intelligence contractor Edward Snowden could stay in Russia, if he wanted to, but must stop leaking secrets and doing other activities to harm the United States.

“If he wants to go somewhere [another country] and is accepted, he can. If he wants to stay here, there is one condition: He must stop his work aimed at harming our US partners, no matter how strange this may sound coming from me,” Putin said.

“He considers himself to be a human rights campaigner, a new type of dissident, to a certain extent, something like Sakharov, but, maybe, of a different scope,” Putin said, referring to Soviet-era scientist and human rights activist Andrei Sakharov.

The Russian leader said his country had no plans to extradite Snowden to the United States, adding that “no one has ever extradited anyone to us.”

“At best, we exchange employees of our Foreign Intelligence Service for those who had been detained, arrested and convicted in Russia,” Putin said.

In the meantime, US President Barack Obama said Monday on an official visit to Tanzania that the US had held “high-level discussions with the Russians about trying to find a solution to the problem" of Snowden’s extradition. A White House spokeswoman confirmed the information, saying that law enforcement agencies in Russia and the US were discussing the matter via their own channels.

Russian Security Council head Nikolai Patrushev said earlier Monday that the presidents of Russia and the US had instructed heads of national security services FSB and FBI to “keep a constant contact and search for possible solution.” Russian presidential aide Yury Ushakov confirmed later in the day that the two services are discussing the matter, but said that Obama and Putin had never addressed the matter in person.

Meanwhile, the Los Angeles Times reported, citing a Russian Foreign Ministry official, that Snowden had on Monday morning met with Russian diplomatic officials and handed them an appeal to 15 countries for political asylum as “a desperate measure” on his part after Ecuador disavowed his political protection credentials. It is unclear whether Russia was among those countries.