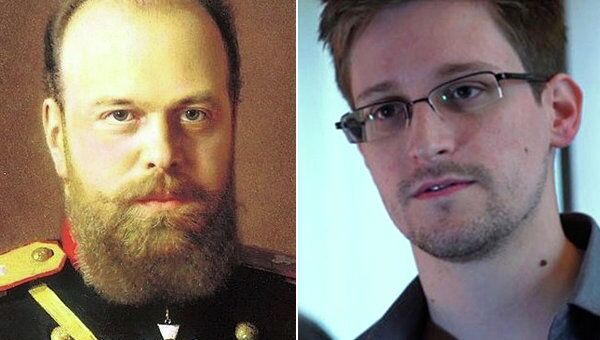 US and Russian officials have both said this week that the lack of a bilateral extradition treaty hampers Washington’s attempts to detain Edward Snowden, but legal experts say a 19th century US-Russian treaty on such transfers may technically still be in force.

WASHINGTON, June 28 (By Carl Schreck for RIA Novosti) – This week, US and Russian officials have repeatedly noted the lack of a bilateral extradition treaty that might help budge fugitive former Central Intelligence Agency (CIA) employee Edward Snowden from his reported hideout in the transit zone of a Moscow airport.

But as recently as 2007 a senior legal adviser to Russia’s prosecutor general publicly suggested that a controversial 19th century extradition agreement between tsarist Russia and Washington was still valid.

“The Russian Empire signed a convention on extradition with the United States in 1887. No one ever canceled it and no one ever renounced it,” Saak Karapetyan, head of international legal cooperation at Russia’s Prosecutor General’s Office, told the Moscow daily Moskovsky Komsomolets.

The treaty cited by Karapetyan formally came into force in 1893 and sparked much outrage in the United States over a provision allowing individuals who attempt to assassinate the Tsar or members of his family to be extradited despite a ban on such transfers for political offenses.

Much has transpired in US-Russia ties since that agreement, including the rise and the fall of the Soviet Union and decades of nuclear brinksmanship. But inquiries to both governments Friday to clarify the precise moment when the 1893 extradition treaty became obsolete yielded mixed results.

A US State Department official told RIA Novosti that it is “the longstanding position of the United States that there is no extradition treaty in force” between the two countries, though the official provided no specific date or year. Officials at the Russian Embassy in Washington were not immediately available for comment, an embassy spokesman said.

A 1970 United Nations report on international treaties indicates Washington removed the extradition agreement from its books in 1941, though the tsarist-era agreement requires one of the sides to formally notify the other of their intention to terminate the treaty in order for it to be cancelled.

It was not immediately clear Friday whether such a formal notification ever transpired, and news reports from 1947 indicated that State Department officials were equally unsure whether an extradition treaty existed between the United States and the Imperial Russia’s Soviet successor state.

In early January of that year, Moscow demanded that Washington hand over Soviet diplomat Kirill Alexeyev, who had defected to the United States with his family from his posting at the Soviet trade mission in Mexico.

The Soviets accused Alexeyev of “embezzlement, treachery, treason, provocation and slander,” among other offenses, but State Department officials were unsure whether the two countries had an extradition treaty under which he could be transferred to the Soviets, The Associated Press reported at the time.

Two weeks later, the State Department informed the Soviets that “no extradition treaty exists” between the two countries and that it is therefore unable to grant Moscow’s request that Alexeyev “be turned over to Soviet authorities,” the New York Times reported at the time.

A 1974 State Department report on international treaties describes the 1893 agreement simply as "obsolete."

Christopher Blakesley, a lawyer who worked on extraditions at the State Department in the 1970s, told RIA Novosti that the tsarist-era extradition treaty may have been scrapped by one or both of the sides in the wake of the Bolsheviks’ overthrow of the Tsar in 1917 and the Soviet renunciation of his foreign commitments.

But cancelation of the treaty “clearly requires” that it be done “through official channels, usually by diplomatic note.”

“This could well have happened,” Blakesley said.

Despite the absence of an extradition treaty, the United States did deport accused Nazi war criminals Feodor Federenko and Karl Linnas back to the Soviet Union in the 1980s. Federenko was subsequently convicted and executed by the Soviets, while Linnas died while awaiting trial.

Since the fall of the Soviet Union, the United States has continued to deport individuals with criminal pasts back to Russia, with hundreds being returned over the past decade, according to statistics from the US Department of Homeland Security.

“We raised these issues more than two years ago, during the first visit of a justice ministry’s delegation to the US. So far, frankly speaking, the US side remains reluctant to accept our proposals,” Russian Justice Minister Alexander Konovalov said during a visit to Washington last year. “But, on the whole, we hope to persuade them and we aim to do our best.”

The State Department official contacted by RIA Novosti said Friday, however, that “there are no discussions of or negotiations toward such a treaty.”

Russian President Vladimir Putin and US President Barack Obama publically addressed the absence of a bilateral extradition treaty when commenting this week on the fate of Snowden, who is reportedly hiding out in the transit zone of Moscow’s Sheremetyevo Airport while eluding US authorities’ attempts to bring him home to face charges of leaking state secrets to the public.

Putin said Russia has no authority to seize him because he has not formally crossed into Russian territory, while Obama administration officials have called on Moscow to expel him in the spirit of reciprocity for seven “criminals” Washington handed over to Russia in recent years.

The leaders’ positions on the issue are likely to trump that of a legal adviser to Russia’s prosecutor general arguing that the 1893 extradition treaty between the two countries is still in force.

But Blakesley, the former State Department extradition lawyer who teaches law at the University of Nevada-Las Vegas, said he is intrigued to find out whether the agreement was ever formally canceled.

“I bet really careful historical research might find it was just kind of left off the books,” Blakesley said. “And if that’s the case, it still is kind of out there in the ether – among the extradition gods at least.”