No More Russian Adoptees to US – Kremlin Ombudsman 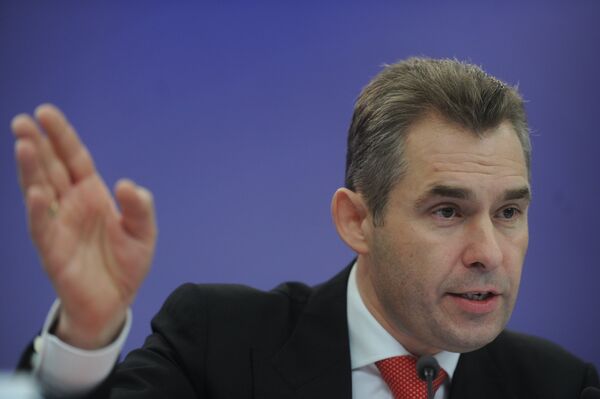 © RIA Novosti . Alexander Utkin
/
Go to the photo bank
Subscribe
Kremlin children’s rights ombudsman Pavel Astakhov said Wednesday that no more Russian children would be allowed to join potential adoptive families in the United States despite calls from US officials for flexibility with adoptions that were “in process” before Moscow banned Americans from adopting Russian children earlier this year.

WASHINGTON, June 26 (RIA Novosti) – Kremlin children’s rights ombudsman Pavel Astakhov said Wednesday that no more Russian children would be allowed to join potential adoptive families in the United States despite calls from US officials for flexibility with adoptions that were “in process” before Moscow banned Americans from adopting Russian children earlier this year.

“The issue is closed because there is no process,” Astakhov told reporters at the Russian Embassy in Washington following two days of discussions with US officials on the subject of international adoptions.

Astakhov, a vocal proponent of the adoption ban that took effect Jan. 1, said the US State Department had presented him with a list of more than 250 names of children they considered to be already in the process of being adopted by American families but that none of those would be considered for exceptional treatment.

Around half of the children on the list have already been taken in by adoptive families in Russia or placed in foster homes or back with their biological parents, Astakhov said.

“The children on this list did not leave the country and they nonetheless were returned to a family,” he said, adding that none of these families had been pressured to take the children into their homes.

Numerous adoptions that had been approved by Russian courts prior to the ban continued through early February, Astakhov said.

Ahead of Astakhov’s press conference Wednesday, a State Department official told RIA Novosti that the United States continues “to encourage the resolution of all adoptions that were in process prior to Jan. 1 in the spirit of our bilateral agreement and based on humanitarian grounds.”

“We have reiterated our deep disappointment with the Russian government’s decision to ban the adoption of Russian children by US citizens,” the official said.

Washington remains “ready to continue discussions with Russia on inter-country adoptions and the welfare of children adopted from Russia, and have agreed to consult regularly going forward,” the State Department official added.

Astakhov said he met with officials from a range of US government agencies to discuss the adoption issue, including Susan Jacobs, the State Department’s special advisor for children’s issues.

Astakhov said the two sides had reached an agreement to create a comprehensive database of Russian adoptees in the United States and that the State Department had pledged to boost efforts to assist Moscow in tracking cases of alleged abuse and neglect of these children by their American parents.

The Russian adoption ban came just days after US President Barack Obama signed the controversial Magnitsky Act – a law banning Russian officials deemed by Washington to have violated human rights from obtaining visas to enter the United States and freezing any US assets they may have.

A spokesman for President Vladimir Putin said the Magnitsky Act had triggered the adoption ban, but reports of sometimes fatal abuse and neglect of Russian adoptees in the United States sparked widespread public outrage in Russia in the years before the ban as well.

Of the roughly 60,000 Russian children adopted by US parents since the collapse of the Soviet Union, at least 20 have died in the care of their adoptive parents. Russian officials suggest many more adopted children have been neglected or abused, but say finding records and documentation to support those claims has been difficult.

Critics of the ban, however, say it will deny tens of thousands of children the chance of a normal family life.