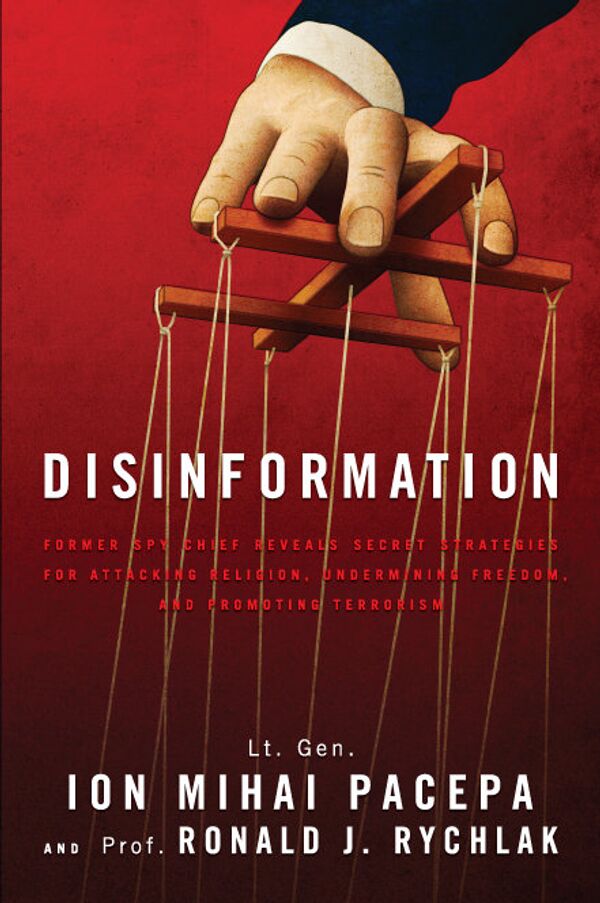 © WND Books
Subscribe
International
India
Africa
The Kremlin has practiced a homegrown technique called disinformation for centuries, including using it to slander the United States, fan the flames of anti-Semitism and convince “much of the world” that US government was behind the assassination of President John F. Kennedy 50 years ago, a new book by former Romanian spy chief Ion Mihai Pacepa says.

WASHINGTON, June 26 (by Karin Zeitvogel for RIA Novosti) – The Kremlin has practiced a homegrown technique called disinformation for centuries, including using it to slander the United States, fan the flames of anti-Semitism and convince “much of the world” that US government was behind the assassination of President John F. Kennedy 50 years ago, a new book by former Romanian spy chief Ion Mihai Pacepa says.

“Disinformation: Former Spy Chief Reveals Secret Strategies for Undermining Freedom, Attacking Religion, and Promoting Terrorism,” also alleges that seeds of “Russian-born disinformation” were sown in the United States during the 2008 presidential campaign of then senator Barack Obama, although they haven’t reached the same level of sophistication as in the Kremlin, which has been practicing disinformation since tsarist days.

Disinformation is defined in the book as spreading an idea in a foreign nation, while making it appear as if the idea originated in that nation.

“You’re disguising your fingerprints,” and the Kremlin is a master at it, Pacepa’s co-author, University of Mississippi law professor Ron Rychlak told RIA Novosti, explaining that the ex-Romanian spy chief can’t give interviews because he has been living under an assumed identity in the United States and under US Central Intelligence Agency (CIA) protection since he fled Romania in 1978.

Pacepa is reported to be the highest-ranking Soviet bloc intelligence official to ever defect to the West and in 1990 wrote “Red Horizons,” which exposed the corruption and brutality of the regime of former Romanian President Nicolae Ceausescu.

One of the many examples of disinformation given in his latest book is Soviet leader “Yuri Andropov’s anti-Zionism campaign, support of Islamic terrorism, and dual promotion of virulent anti-Semitism and anti-Americanism among Middle East Arabs.”

The book claims the Soviet bloc planted some 4,000 agents of influence in the Islamic world in the 1970s, each armed with “military weapons” and “hundreds of thousands of copies of the ‘Protocols of the Elders of Zion,’” the infamous anti-Semitic book, which purportedly documents a Zionist plan to conquer the world but which Jewish leaders have dismissed as “a work of fiction, intentionally written to blame Jews for a variety of ills.”

The Kremlin’s plan, Pacepa and Rychlak say, was to fan the flames of anti-Semitism and anti-Americanism in the Middle East.

“The seeds they planted in the Arab world decades ago still sow hatred and destruction in the form of violence and terror,” James Woolsey, former director of the CIA wrote in the foreword of the book.

“Disinformation” was also used during World War II to transform Pope Pius XII, “who personally saved countless Jews from Hitler’s Holocaust… into a Nazi sympathizer,” and to lead “much of the world to believe that the US government itself masterminded the assassination of President John F. Kennedy.”

The first book to be published about the Kennedy assassination was written by a “documented KGB agent,” Pacepa and Rychlak say.

A series of fires at African American churches in the United States in the 1990s were also part of a Kremlin-backed disinformation campaign that was “ignited and promoted” by the World Council of Churches (WCC), which, the two authors say “has been infiltrated and controlled by Russian intelligence since 1961.”

The acts of arson were aimed at giving the United States a global reputation as a racist, neo-Nazi state, the book says.

The seeds of disinformation have begun creeping into the US halls of power, the two authors claim.

“There is serious concern in the United States that things that we saw develop in the Soviet Union in the past are beginning to happen in the United States,” Rychlak told RIA Novosti, explaining that the first sign of a disinformation campaign is when a new leader discredits his predecessors.

Pacepa writes in the book that Obama’s 2008 campaign for the presidency was, to him, “a replay of one of those election campaigns of Ceausescu’s … which I was involved with during my years in Romania.”

“Ceausescu’s media painted the Romania of his predecessor, Gheorghiu-Dej, as a decaying, corrupt, economically devastated country and demanded it be changed by redistributing the country’s wealth. It was a disinformation campaign,” Pacepa wrote.

The book and an accompanying DVD were released Tuesday by WND Books, a conservative US publisher that includes right-wing commentator and media personality Glenn Beck in its stable of writers, sells Tea Party bumper stickers on its merchandise website, and runs a news website that includes a section questioning Obama’s US citizenship.