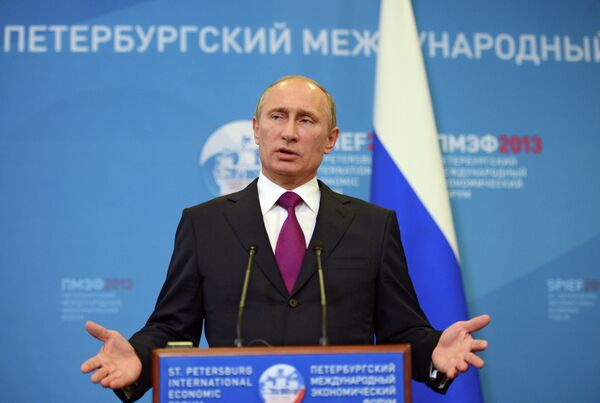 During his keynote speech to international investors and officials at the annual St. Petersburg Economic Forum on Friday, Putin said the state would spend $13.7 billion on three major infrastructure projects, and could invest up to $43.5 billion on more of them to fend off looming economic stagnation.

“I know that the interest of investors in infrastructure projects is very great, particularly if the state is prepared to provide guarantees, minimize risks and participate as a co-investor,” Putin told delegates.

The three earmarked projects include building a new ring road outside Moscow, the modernization of the trans-Siberian railroad and the construction of a new high-speed rail link from the capital to Kazan in central Russia. The money will come from the $87 billion National Welfare Fund, which was created by stockpiling windfall oil revenues.

While huge infrastructure projects are traditionally used by governments seeking to stimulate economic growth, simply throwing money at the problem will not necessarily catalyze investment, particularly foreign investment, delegates at the gathering said.

A number of investors pointed out that longstanding concerns – like insufficient rule of law, endemic corruption, ineffective regulation and a lack of transparency – have yet to be addressed in full, so that those working in Russia can feel confident and protected.

“We need support from government, but we need support from government within clear parameters,” Martin Stanley, an executive in charge of infrastructure investment at Macquarie, which has $630 million under management in Russia and $100 billion worldwide, said Friday during a panel discussion. “We don’t want overweening government support; otherwise, that will squeeze out private capital… We need a clear, sustainable and predictable regulatory system.”

The investment climate has improved over the last decade, he added, but “the image of Russia is still poor in terms of predictability and arbitrary administrative rulings.”

A particular deterrent for investors has been Russia’s slowing economic growth, which fell year on year to 3.4 percent in 2012 from 4.3 percent in 2011, with officials cutting their 2013 growth predictions earlier this year from 3.6 percent to 2.4 percent.

“When you have declining growth rates, the situation is not getting better,” said Frank Schauff, the head of the Association of European Businesses, after Putin’s speech, pointing out that conditions are worse this year than last year.

Although Russian officials deny the investment climate is deteriorating, they too acknowledged gathering economic problems.

A sputtering economy is new political territory for President Putin, who enjoyed a halcyon period of rising oil prices and high growth rates during his first two terms as president – allowing him to finance large increases in social spending.

He used his keynote speech in St. Petersburg on Friday to highlight the economic headwinds, which he attributed to steadily falling commodity prices.

“For many years we lived in a situation of furious, almost unstoppable, increases in the price of our exports,” Putin told delegates. “Now that trend is no more, and there are no easy decisions, and there is no magic wand.”

Not all, however, agree that it is only a downward trend in commodity prices that is to blame for Russia’s problems. Investors are also put off by political developments in Russia, said Charles Robertson, chief economist at Renaissance Capital, a Russian investment bank focusing on emerging markets.

“[Guriev’s story] is an important topic,” said Vyugin. “It speaks to how the system works… He is a person who has committed no crime.”

Putin’s decision to return to the Kremlin for a third term, and the policies he has pursued since his inauguration last year, also deter investors, said Robertson.

Under the presidency of Dmitry Medvedev, now Putin’s ever more frequently sidelined prime minister, there was a belief that real institutional reform was underway and that “new faces and new ideas” would appear within Russia’s ruling elite, said Robertson – but now few of those hopes remain.

“Investors are saying very clearly that Russia is not an exciting story at the moment,” he said. “And there is no sense of that changing.”