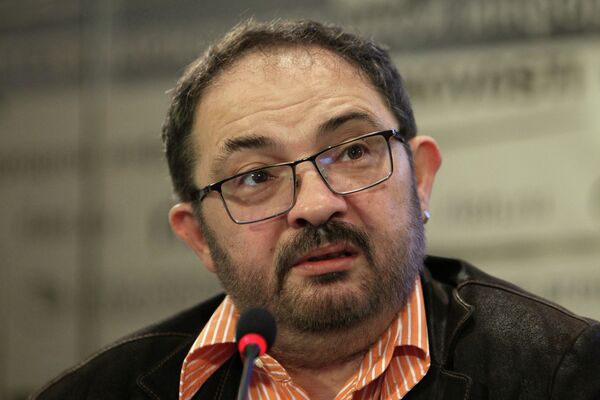 The head and founder of a controversial Russian museum claimed on Thursday he was fired after opening an art exhibition which ridiculed the 2014 Winter Olympics in Sochi, President Vladimir Putin’s pet project.

MOSCOW, June 20 (RIA Novosti) - The head and founder of a controversial Russian museum claimed on Thursday he was fired after opening an art exhibition which ridiculed the 2014 Winter Olympics in Sochi, President Vladimir Putin’s pet project.

Since 2009, Marat Guelman’s Museum of Contemporary Art (PERMM) in the Urals Region city of Perm has hosted dozens of groundbreaking exhibitions featuring unconventional and politicized art and has repeatedly enraged the authorities and activists from Russia’s influential Orthodox Church.

Guelman said his dismissal followed an official ban earlier this month from the opening of the “Welcome! Sochi 2014” exhibition at the city's White Nights arts festival, which featured works by Vasily Slonov including caricatured images of the Games mascots, Soviet cartoon characters and political figures.

One of the caricatures portrayed Soviet dictator Josef Stalin wearing a polar bear costume, and another one showed a snow leopard – a Sochi mascot reportedly chosen by Putin himself – holding a small Statue of Liberty upside down, her naked buttocks revealed.

After Guelman opened the exhibition at PERMM, the Perm region culture ministry “discontinued” his contract on Wednesday without providing any explanation.

Writing on his Twitter blog on Wednesday, Guelman said he had been fired by Perm Region's Culture Minister Igor Gladnev. "Gladnev just called and confirmed the dismissal. The minister of culture who was shutting down the exhibitions, has clearly confused his role with the FSB [Federal Security Service]," he wrote.

But Perm Regional Governor Viktor Basargin claimed on Thursday in his blog that Guelman “had possibly abused” his position and used government funds for self-promotion.

Guelman dismissed the allegations and said his dismissal was the result of official “censorship.”

“We had complicated relations with the authorities, art is the last truly free environment” in Russia, Guelman told RIA Novosti. “Censorship is inadmissible and counterproductive.”

God’s Will, a youth Orthodox group which has previously disrupted gay pride rallies, called on the authorities on Thursday to investigate Guelman, accusing him of corruption, embezzlement and inciting religious hatred.

Guelman wrote on Twitter later Thursday that his office in Perm was being searched by police but not, as far as he knew, because of any criminal case. He said police must be checking a June 6 report in the Izvestia daily, which claimed that the White Nights arts festival had cost the organizers 250 million rubles ($7.6 million), including a combined 189 million from the regional and city budgets.

Regional police pointed out to RIA Novosti that their activities were a “check” not a “search,” but told the RBC news agency that a team of officers, Audit Chamber personnel and prosecutors are checking “the legitimacy of spending of budget funds allocated on the White Nights festival in Perm.”

Protest artists have fallen foul of the law in Russia frequently in recent years.

Two members of the Pussy Riot female punk rock band were sentenced last August to two years in jail for their unsanctioned “punk prayer” against President Putin at Moscow’s Christ the Savior cathedral.

Several criminal investigations have been opened against artist Artyom Loskutov for allegedly inciting religious hatred with his “icons” on T-shirts and billboards that portrayed Pussy Riot members as Holy Mary and Orthodox saints.

In 2010, two art curators in Moscow were convicted and fined for organizing a 2007 art exhibition that included images of Jesus Christ depicted as Mickey Mouse and Soviet leader Vladimir Lenin. The exhibition was closed after Orthodox activists stormed in, damaging some of the exhibits.

The government is currently introducing a law which would greatly increase the penalties for offending the feelings of religious believers.

Putin has actively lobbied for the Sochi Games which are widely seen as one of his favorite projects, and a tool for boosting Russia's image abroad.

Kremlin critics say the preparations for the Sochi Games are symptomatic of Russia’s endemic corruption and human rights violations. Some Sochi residents complained they were forcibly evicted from their houses to give way for construction projects, while environmental groups claimed the redevelopment of the area has harmed endangered species and migration patterns of rare birds.

(Updated with news of police checks of Guelman's office)