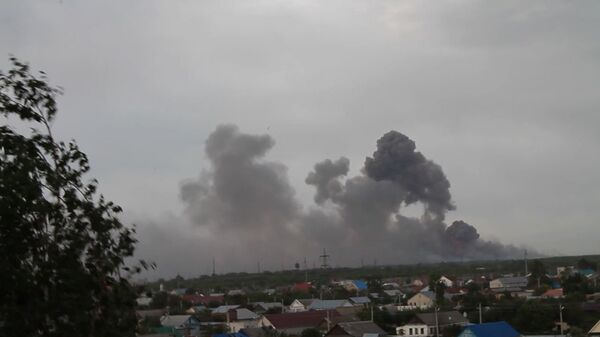 © RIA Novosti
Subscribe
Russian investigators have launched a probe into multiple explosions that rocked an ammunition depot in central Russia this week, reportedly killing at least one person.

MOSCOW, June 19 (RIA Novosti) – Russian investigators have launched a probe into multiple explosions that rocked an ammunition depot in central Russia this week, reportedly killing at least one person.

The fire at the ammunition testing site near the city of Chapaevsk, in Russia’s Samara Region, broke out late Tuesday, followed by a series of explosions that ripped through the area, sending shrapnel flying over a distance of up to a kilometer from the site.

The Russian Investigative Committee said on Wednesday that the depot housed "some 18 million shells" of various calibers, according to preliminary reports. Nearly 6,000 of these rounds were 122-mm artillery shells, the Emergencies Ministry said earlier.

About 6,500 local residents, including over 800 children, have been evacuated from a village near the ammunition depot. A total of 34 people have been injured, and at least one person has died, Samara Region Governor Nikolai Merkushkin told Rossiya-24 TV on Wednesday. The Investigative Committee has not confirmed the report of the fatality.

Blasts were still being observed at the ammunition depot on Wednesday afternoon, local emergency services said, adding that the intervals between them had increased. Investigators had said earlier on Wednesday that the explosions had stopped. The Emergencies Ministry said early on Wednesday morning that in the worst case scenario, the fire could continue to burn for two or three days.

Russian President Vladimir Putin has called on regional authorities and government ministers to “take measures to provide aid” to those affected by the explosions.

More than 1,500 personnel and over 240 units of machinery and equipment, including four drones, eight firefighting helicopters and two firefighting trains, have been deployed to contain the fire and explosions, the Emergencies Ministry said.

The incident is the latest in a string of fires and explosions at munitions storage and disposal sites that have plagued Russia in the past two years.

Updates with governor's report of one person killed, 34 injured.