Russian Gays in US Call for Boycott of Sochi Games 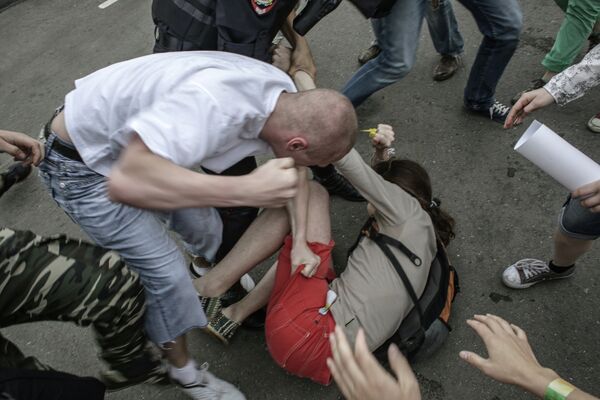 A group of gays from Russia and the former Soviet republics living in the United States has a message for gay athletes and others planning to attend the 2014 Winter Olympics in Sochi: Don’t go.

WASHINGTON, June 17 (By Maria Young for RIA Novosti) – A group of gays from Russia and the former Soviet republics living in the United States has a message for gay athletes and others planning to attend the 2014 Winter Olympics in Sochi: Don’t go.

The group is calling for a boycott of the games, saying the lesbian, gay, bisexual and transgender (LGBT) community is not safe in Russia – and they hope even those who are not gay will support the ban.

“LGBT people in Russia are scared, they live in fear, and we want people to be aware of the issue. If they feel strongly about human rights they should boycott the Olympics in Sochi,” said Nina Long, co-president of RUSA LGBT, a Russian-speaking LGBT organization based in New York.

“We really want the LGBT community to know it’s unsafe to travel there,” she said in an interview with RIA Novosti.

A statement from the International Olympic Committee (IOC) did little to ease her concerns, Long said.

The committee told RIA Novosti in a statement that the IOC has a long commitment to non-discrimination against Olympic athletes, adding that “athletes of all orientations will be welcome at the Games.”

“They have to put up the statement like that, otherwise it’s an international scandal, but it’s a lie… it’s just to make it hush-hush and nice on some international level,” Long said.

RUSA LGBT has several hundred gay members from Russia and surrounding countries of the former Soviet Union who live now in the New York area, Long said. The group is planning to march and hand out flyers with information about the Olympic boycott in New York’s upcoming annual Gay-Pride Parade, scheduled for June 30, which will feature a Russian float for the first time.

Long and others say the issue of gay rights in Russia and FSU countries is more urgent now than ever before, with a growing conservative movement across the region that has led to new anti-gay laws and a growing homophobic environment.

Laws that forbid the spreading of propaganda for non-traditional sexual relations to minors started in local communities but grew to larger cities like St. Petersburg in 2012, and passed Russia’s lower house just last week.

Such laws “sound fine,” but in reality give “government-issued license to anyone who wants to persecute gays,” said Ivan Savvine, an art curator and gay man from St. Petersburg who sought asylum because of his sexual orientation shortly after he came to the United States in 2004.

“It became really dangerous for me to live there. There was quite a bit of violence that I was faced with, and unfortunately there are no longer isolated instances of persecution. It’s definitely escalated,” Savvine said in an interview with RIA Novosti.

He was granted asylum in 2006 and became a US citizen earlier this year.

“It’s getting worse and worse,” said Alexander Kargaltsev, a gay man and political activist from Moscow who said he was persecuted for his sexual orientation several times and was beaten by police in Moscow in 2009. He came to the United States in 2010, when he won a scholarship to the New York Film Academy, and immediately applied for asylum.

His fully nude photography exhibition entitled “Asylum” opened at Savvine’s 287 Spring Gallery in New York in October 2012 and featured Russian gay men who fled persecution in their homeland and came to the United States.

The models were shot in the nude in iconic places in New York City, an effort to visually reproduce the immigrant experience of “starting from scratch with no family or friends and often without the language they can speak or understand," said Savvine in an introduction to the exhibit.

Today, Kargaltsev said, he gets a growing number of requests from Russian gays seeking guidance in the asylum process.

“They contact me on Skype and on Facebook all the time now. It used to be one every two months and now it’s one every week,” he said.

“We’ve had clients in Russia who’ve been beaten by police, but more often it’s vigilante groups and thugs engaging in social cleansing and unfortunately the police don’t do anything to offer protection,” said Aaron Morris, senior staff attorney for Immigration Equality, a national organization that advocates for LGBT equality under US immigration law and offers legal counsel to those seeking asylum.

Immigration Equality has seen a sharp increase in the number of requests for asylum assistance on the basis of sexual orientation from Russia. There were 18 such requests in 2009 and more than triple that number – 63 such requests – in 2012, according to figures supplied by the organization.

“We’ve had clients who have been persecuted and attacked, sometimes very graphically,” Morris said.

Kargaltsev, Savvine and Long all plan to march in the New York Gay Pride parade, handing out flyers and banners calling for the Olympic boycott and generally working to drum up support for gays in Russia.

“We can’t do much from here but we want people to know what’s happening and to let the LGBT community in Russia know that we are with them and we are marching for them,” said Long.

“I don’t think it will matter to (Russian President Vladimir) Putin because the boycott will just mean there won’t be any gays at the Olympics and that makes them happy, but the international noise will matter,” said Kargaltsev.