Britain and US Spied on Medvedev in 2009 - Newspaper Report 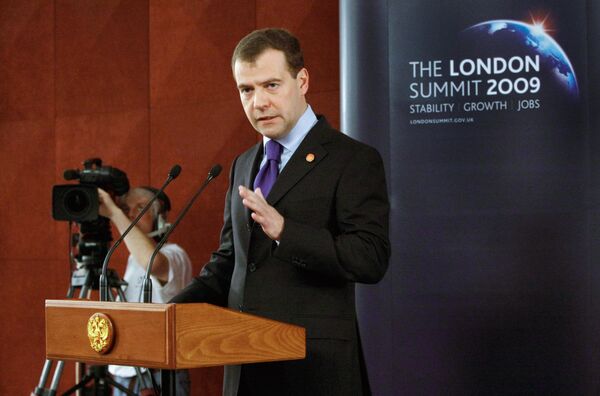 United States intelligence officers based in Britain allegedly spied on then-Russian President Dmitry Medvedev during his participation in the 2009 G20 summit in London when he met with US President Barack Obama for the first time, according to documents leaked by whistle-blower Edward Snowden.

MOSCOW, June 17 (RIA Novosti) – United States intelligence officers based in Britain allegedly spied on then-Russian President Dmitry Medvedev during his participation in the 2009 G20 summit in London when he met with US President Barack Obama for the first time, according to documents leaked by whistle-blower Edward Snowden.

A report detailing the secret communications intercepted from Medvedev and the Russian delegation during the G20 gathering was published four months later by US surveillance organization the National Security Agency, or NSA, Britain’s Guardian newspaper reported Sunday, citing a copy of the report.

The NSA has been at the heart of a blockbuster spy scandal since confidential information supplied by Snowden, a former NSA and CIA employee, began to appear in the Guardian earlier this month.

The report produced by the NSA after the G20 meeting was entitled "Russian Leadership Communications in support of President Dmitry Medvedev at the G20 summit in London – Intercept at Menwith Hill station," and showed "a change in the way Russian leadership signals have been normally transmitted," the Guardian reported.

Menwith Hill station is a joint British and US intelligence hub in Yorkshire, in the north of England.

The document was subsequently shared with top British, Australian, Canadian and New Zealand officials, according to the Guardian.

There was a mixed reaction amongst Russian officials to the allegations, but Alexei Pushkov, head of the State Duma's International Affairs Committee, described the surveillance on Medvedev as a “scandal” and “sheer deception,” on his Twitter account Monday.

The G20 is a grouping of the world’s 20 most powerful economies. As well as important talks with Obama, during the 2009 gathering Medvedev met with German Chancellor Angela Merkel, British Prime Minister Gordon Brown and Chinese leader Hu Jintao.

The Guardian also published details Sunday about a broader surveillance of attendees at the conference carried out by British intelligence services that included the monitoring of phone conversations and computers, and tricking delegates into using fake internet cafes.

President Vladimir Putin arrived in London on Sunday for talks with British Prime Minister David Cameron. On Monday and Tuesday he is due to participate in the G8 summit hosted by the United Kingdom on the shores of Lough Erne in Northern Ireland.