US Nazi Hunters Race Against the Clock 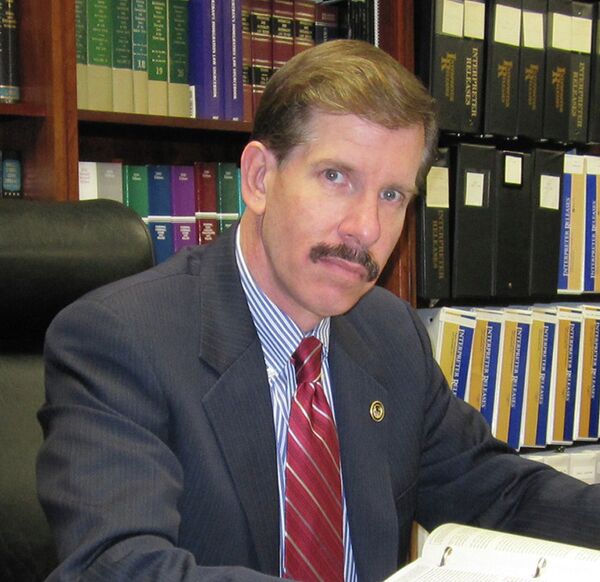 © US Department of Justice
Subscribe
From the moment Eli Rosenbaum joined the US government’s campaign to track down Nazi collaborators three decades ago, he knew it was a time-sensitive job.

WASHINGTON, June 12 (By Carl Schreck for RIA Novosti) – From the moment Eli Rosenbaum joined the US government’s campaign to track down Nazi collaborators three decades ago, he knew it was a time-sensitive job.

“We were told even then: ‘These people are old. You need to work as fast as you responsibly can,’” Rosenbaum, the US Justice Department official in charge of rooting out Nazi collaborators living in the United States, told RIA Novosti in a recent interview.

It’s a campaign that has taken on even greater urgency as time threatens to claim the last of these alleged war criminals, including four elderly men that US courts have ruled complicit in atrocities committed during the war in territories that now belong to Ukraine and Lithuania, both former Soviet republics.

“We still have open cases that are in court or have been in court, and we’re trying to remove these people back to Europe,” Rosenbaum said.

Rosenbaum joined the Justice Department’s Office of Special Investigations (OSI) as an intern in 1979, and in 1995 he was named director of the unit. In 2004, OSI transformed into a new agency charged with handling other human rights cases as well.

Since OSI’s inception, the unit has won cases against more than 100 people accused of atrocities as Nazi collaborators. But it has been a complicated effort, in part because of crucial evidence that was gathered by officials in the Soviet Union, some of which was dismissed as unreliable by US judges.

In the OSI’s early years the Soviet government tipped off US authorities about purported Nazi collaborators who fled west along with the hundreds of thousands of refugees that came to the United States after World War II, Rosenbaum said.

In some cases Moscow would contact the US State Department directly, Rosenbaum said. In other cases the state-controlled media would release exposes about these individuals, which would then be picked up by US officials, Jewish organizations or US media outlets, he added.

Before its collapse in 1991, the Soviet government turned over to the OSI captured Nazi documents and witness statements gathered by its investigators, Rosenbaum said. Moscow also made witnesses available for questioning but did not allow them to leave the country, meaning the Americans had to travel to the Soviet Union to obtain video testimony, he said.

The documents fared better than the video testimony in US courts, where judges questioned the reliability of witnesses giving statements under the watchful eye of Soviet officials, Rosenbaum added.

“With few exceptions our courts didn’t credit the witness testimony, which was incredibly frustrating for us,” he said. “We still managed to win the cases in almost all of them, but it was a problem.”

In one high-profile case, a US federal judge in 1983 refused to consider video testimony from Soviet witnesses in the OSI’s case against Juozas Kungys, a retired dental technician in New Jersey whom the United States accused of participating in a 1941 massacre in Nazi-controlled Lithuania.

“The Soviet criminal and judicial system is structured to tailor evidence and produce results which will further the important political ends of the Soviet state at the expense, if need be, of justice,” Judge Dickinson Debevoise said, according to a 1985 report in the Christian Science Monitor.

Kungys eventually admitted to lying on his US citizenship application, though he was not found complicit in Nazi war crimes. In exchange for the admission, which resulted in Kungys’ denaturalization, the US government agreed that it would not seek his deportation.

Kungys died in the United States in 2009.

Historians, academics and lawyers concede that the Soviet government had clear propaganda interests in portraying the United States and other Western nations as a safe haven for Nazi collaborators.

“The Soviet courts can’t be compared to Western courts, but the individuals whom they tried in absentia for World War II-era crimes were almost invariably war criminals,” said Zuroff, author of the 2009 book “Operation Last Chance” about the global efforts to bring Holocaust perpetrators to justice.

Many of the cases the US government has won against alleged Nazi war criminals have involved individuals accused of collaborating with the Nazis in the Baltic states and Ukraine – former Soviet republics that gained independence after the fall of the Soviet Union – who claimed they were swept up in the conflict between two dictatorships but denied committing atrocities.

The most prominent case in recent years was that of John Demjanjuk, a Ukrainian-born auto worker in Detroit who was stripped of his US citizenship in for his alleged activities in the Trawniki SS camp and Sobibor death camp.

In 2009, Demjanjuk was deported to Germany, where he was found guilty two years later for his part in the killing of nearly 29,000 Jews at Sobibor in Nazi-controlled Poland. He died in 2012.

Since the creation of the OSI, the United States has sought to denaturalize or deport 137 alleged Nazi collaborators, winning cases against 107 of those individuals, a Justice Department spokesman told RIA Novosti on Wednesday.

The US government lost nine of those cases and dismissed two others, while in the remaining 19 cases the defendants died before a court could issue a ruling, the spokesman said. The Justice Department has also prevented around 200 suspected Nazi and Japanese World War II criminals from entering the United States since OSI’s inception, the spokesman added.

Rosenbaum said his office is continuing to investigate numerous leads on suspected Nazi collaborators living in the United States in addition to the four current targets of its litigation.

One of those targets is John Kalymon, a Michigan man who was stripped of his US citizenship in 2007 and was ordered to be deported for allegedly killing Jews when he was a member of an auxiliary police unit in Nazi-controlled Ukraine.

In January, a US federal appeals court rejected his appeal challenging his deportation.

Rosenbaum concedes that the window of opportunity to bring Nazi collaborators to justice is even smaller now than when he began working at OSI more than three decades ago, but he said his team is not letting up.

“There are still a few years left in which justice can be pursued and, I think, obtained.”