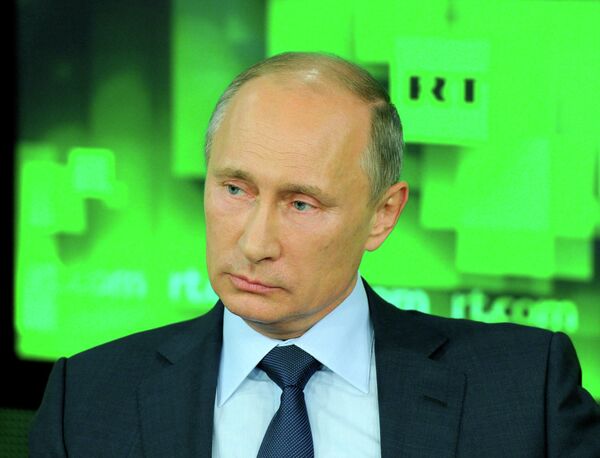 © RIA Novosti . Mikhail Klementiev
/
Go to the mediabank
Subscribe
International
India
Africa
Russian President Vladimir Putin has defended the right by Russian special services to wiretap but stressed that such practices should take place only when they are sanctioned by a court.

MOSCOW, June 11 (RIA Novosti) – Russian President Vladimir Putin has defended the right by Russian special services to wiretap but stressed that such practices should take place only when they are sanctioned by a court.

“If this [wiretapping] is made within the framework of the law, by which the special services’ rules of conduct are guided, this is normal. If this is made illegally, this is bad,” Putin said in an interview with Russia Today.

The president said it is common knowledge that electronic intelligence-gathering services monitor citizens and organizations in an effort to fight international terrorism. “I repeat once again, inside the country we proceed from the necessity to obtain a court’s sanction for such operations. Why should this not apply to the work of special services?” he said.

“As a whole, such methods are required. The question is only how they are controlled by the society. You can’t just listen to a phone call in Russia, I can say this for sure, without a special order from court. Generally speaking, this is how this should be done in civilized society while fighting terrorism with the use of any technical means," he said.

The Russian leader made the statement when asked about former CIA analyst Edward Snowden’s recent leak of top-secret documents detailing the US government’s sweeping electronic surveillance program known as “Prism.” The revelation has sparked concerns over the scope of surveillance around the world.

Putin, a former KGB agent, made headlines in March by saying, “It’s bad to eavesdrop,” adding that he had learned this from his time in the KGB. “[And] I gave it up.”

Legal wiretaps have almost doubled in Russia since 2007 due to a lack of external control over the secret services, Andrei Soldatov, editor-in-chief of Agentura.ru, an online secret services think tank, said last June.

Russian courts issued 466,152 sanctions for telephone wiretaps and the inspection of regular and electronic mail in 2011, according to the website of Russian Supreme Court. That figure stood at 265,937 in 2007, it said.

Tapped conversations by opposition figures have been appearing online since 2010, with none of the leakers revealed. The trend was started by a string of compromising videos featuring politicians Eduard Limonov, Alexander Belov and Ilya Yashin, as well as journalists Mikhail Fishman and Viktor Shenderovich, who were separately filmed bribing traffic police, taking drugs and having sex with a woman. Hackers also leaked emails from the mailbox of corruption whistleblower and Kremlin critic Alexei Navalny.