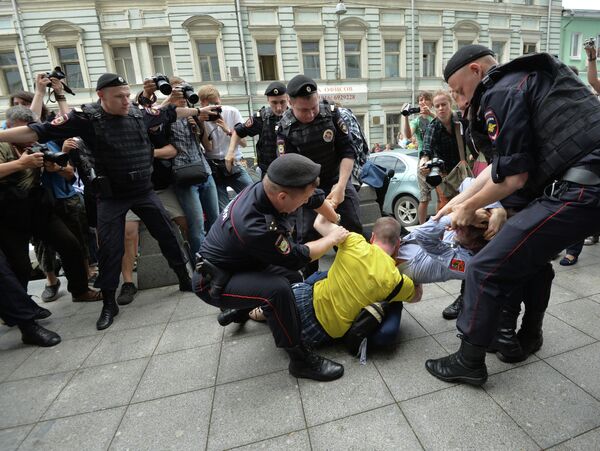 © RIA Novosti . Ilya Pitalev
/
Go to the photo bank
Subscribe
Protests outside the Russian parliament building turned violent on Tuesday as clashes broke out between activists for and against two proposed bills – one restricting the "promotion" of homosexuality, the other “to protect religious believers’ feelings.”

MOSCOW, June 11 (RIA Novosti) – Protests outside the Russian parliament building turned violent on Tuesday as clashes broke out between activists for and against two proposed bills – one restricting the "promotion" of homosexuality, the other “to protect religious believers’ feelings.”

About 300 people gathered in unauthorized protests about these bills outside the State Duma. The numbers of people mobilized on each side indicates how split Russian society is over these issues.

A RIA Novosti reporter at the scene witnessed how the demonstration started peacefully, with a police cordon separating anti-bill LGBT activists from those backing the bill.

When some of the gay couples protesting against the bill to restrict “the promotion of same-sex relationships” started kissing, pro-bill activists responded by hurling eggs and bundles of nettles.

Some anti-bill protesters chanted “Moscow is not Baghdad” (seemingly more of a reference to a generic anti-gay, conservative, religious society, than a specific comment on today’s Iraq) while pro-bill demonstrators shouted: “Moscow is not Sodom.”

The riot police failed to contain the surging crowds, and several activists clashed in a fight. The police said that about 30 activists were detained, but did not indicate whether these were pro- or anti-bill protesters.

Masha Gessen, a prominent Moscow-based journalist and outspoken defender of gay rights, was one of those taken to a police station. She tweeted that she was detained after a pro-Orthodox Church activist attacked her “physically” but was not detained by riot police.

There would also be tougher fines for “the promotion of non-traditional sexual relationships” involving the mass media and the Internet: from 50,000 rubles to 1 million rubles, or even 90 days of arrest for people involved in organizations found guilty of this offense.

This daft law has been widely criticized by human rights advocates as Russian law doesn’t carry definition of the key terms, which would hand the authorities carte blanche in interpreting it, therefore leaving it open to abuse – i.e. unfairly targeting LGBT members of the community.

“Russia is trying very hard to make discrimination look respectable by calling it ‘tradition,’ but whatever term is used in the bill, it remains discrimination and a violation of the basic human rights of LGBT people,” Graeme Reid, LGBT rights program director at Human Rights Watch, said in a statement released on Tuesday ahead of the vote.

Despite the criticism, the bill has gained considerable support among the population. According to a recent survey by the state-run pollster VTsIOM, around 88 percent of Russians back increased restrictions relating to homosexuality.

Similar laws have already been introduced in St. Petersburg and several towns across Russia.

The other bill up for consideration today would make “insulting religious believers’ feelings” a criminal offense. These amendments come in the wake of the trial against the all-female punk band Pussy Riot that put two of its members in prison for their “punk prayer” performance in Christ the Savior Cathedral.

Under the religious offense bill, publicly insulting believers’ feelings, including by vandalism and the desecration of holy sites, would be punishable with a fine of up to 500,000 rubles ($15,000), up to 200 hours of compulsory labor, or up to three years in prison.

This bill is strongly backed by the same groups of activists that support the anti-LGBT bill, in the line with the Russian Orthodox Church’s position.

Votes on both bills in the second and third readings are scheduled for late Tuesday afternoon.

Updates at 17:17 with background, clarifying lead, and re-wording headline at 17:50, adding explanation re "Baghdad" comment at 19:41