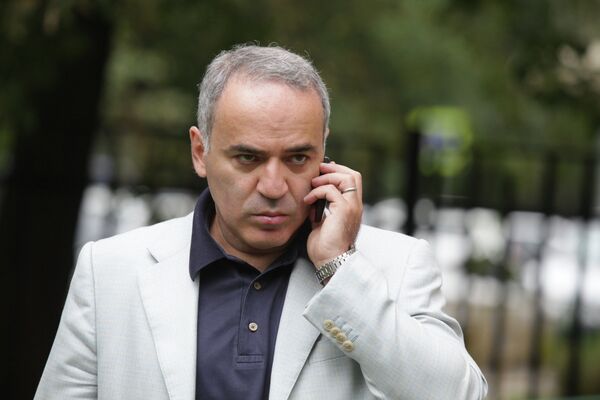 Former chess grandmaster and political activist Garry Kasparov has said he will not come back to Russia because his freedom to subsequently leave the country could be curtailed.

MOSCOW, June 6 (RIA Novosti) – Former chess grandmaster and political activist Garry Kasparov has said he will not come back to Russia because his freedom to subsequently leave the country could be curtailed.

“Right now I have serious doubts that if I return to Moscow I will be able to travel back.” Kasparov told a press conference in Geneva on Wednesday, according to an audio recording posted on his personal website. “For the time being I refrain from returning to Russia.”

In a Facebook post on Thursday, Kasparov said that he is unable to work in modern Russia.

"I have dedicated my life to my human rights activities and my education programs and it is impossible to imagine I would be allowed to continue this work inside Russia today," he wrote. "Adding another victim to the regime's list will not do much good."

Kasparov linked the risk of his detention with an investigation into the actions of protestors who clashed with police on the eve of Putin’s presidential inauguration last year; a case which the opposition insists is politically motivated.

“I kept traveling back and forth until late February when it became clear that I might be a part of these ongoing investigations into the activities of political protestors,” said Kasparov, ahead of his receipt of a human rights award from the United Nations.

The admission comes less than a month after Kasparov denied rumors he had left Russia for good. In an April 7 article refuting such claims, Kasparov quoted a line from Russian singer Vladimir Vysotsky: “Don’t worry, I haven’t left/And don’t get your hopes up, I won’t leave!”

Kasparov was allegedly beaten by police after being detained last August outside the Moscow court room where feminist band Pussy Riot were sentenced for their performance of an anti-Putin “punk prayer.”

Kasparov’s appearances in Russia have become less frequent in recent years as he concentrates his efforts on lobbying for the Russian opposition outside the country where he was born.

"Putin is at the center of the web, but the fight for human rights is a global one and it is critical to both assist and to seek assistance from allies abroad," he wrote on Facebook.

Updated with new comments from Kasparov