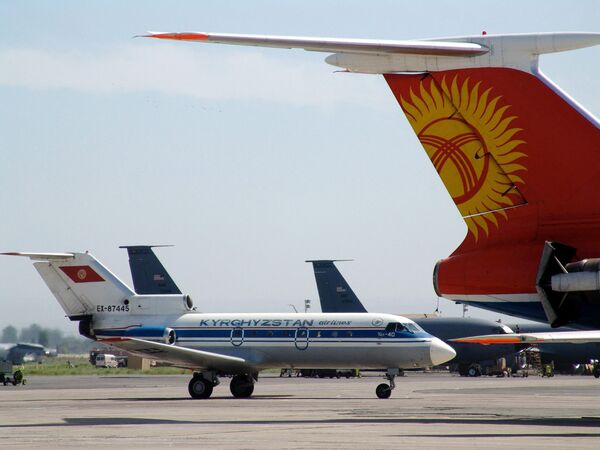 © RIA Novosti . Vladislav Ushakov
Subscribe
The United States has implemented new sanctions against airlines in Kyrgyzstan and Ukraine that it says helped Iran acquire aircraft, which may have been used to deliver weapons for the war in Syria.

MOSCOW, June 5 (RIA Novosti) – The United States has implemented new sanctions against airlines in Kyrgyzstan and Ukraine that it says helped Iran acquire aircraft, which may have been used to deliver weapons for the war in Syria.

The US Treasury Department said last week that Kyrgyz Trans Avia and two Ukraine-based airlines, Bukovyna and Ukrainian-Mediterranean (UMAir), as well as an airline in the United Arab Emirates, had all “served as intermediaries for the acquisition of aircraft by [Tehran-based] Mahan Air and Iran Air as Iran continues to move illicit cargo to Syria for the ... regime’s violent crackdown against its own citizens.”

Both Mahan Air and Iran Air were sanctioned by the United States in 2011 for assisting Iranian armed forces, according to a May 31 statement on the department's website. The statement also says Mahan Air has transported personnel and weapons for the Lebanon-based Shia militant group Hezbollah.

Hezbollah is currently heavily involved in the fighting alongside Syrian government forces, according to a UN report released Tuesday. US officials also believe the group has facilitated shipments of "illicit cargo" to Syria in support of President Bashar Assad and his troops.

Kyrgyz Trans Avia, listed on aviation register websites as operating two Airbus airliners, an A300 and A310, “has been publicly identified as an umbrella company purposely established for importing aircraft to Iran,” the Treasury Department said in its statement. The document also said the airline "acted as an intermediary for Mahan Air's acquisition of eight aircraft" between 2009 and 2010.

The airline could not be immediately reached for comment Wednesday. However, on June 3, a company representative was quoted by Kyrgyzstan's Vecherny Bishkek newspaper as saying that 2013 would be the fifth year the company would be using Mahan Air's planes to fly Kyrgyz Muslims to their annual pilgrimage to Saudi Arabia. The representative said the planes carried only passengers, not arms.

Bukovyna and UMAir issued similarly worded statements saying their operations complied with Ukrainian, Iranian and international law, as well as UN requirements. Both statements, sent to RIA Novosti by a UMAir representative, said the companies are not licensed to transport arms and have not sold any aircraft to Iranian operators, but have been "wet leasing" aircraft to Iran for some time, meaning they provide not only the plane, but crew and maintenance.

A Bukovyna representative reached by telephone said the two Ukrainian companies have the same owner. The UMAir website and the Treasury Department have identified UMAir's owner as Rodrigue Elias Merhej, who is also covered by the new restrictions.

The Treasury Department has likewise sanctioned Cyprus- and Ukraine-based Ferland Company Limited, which it says “facilitated deceptive transactions for or on behalf of the National Iranian Tanker Company (NITC), which was identified by Treasury as a government of Iran entity in July 2012.”

The United States claims that in March 2013, “Ferland and NITC cooperated in a scheme to sell Iranian crude oil deceptively in order to help Iran evade international sanctions.”

The Treasury Department’s action is the first use of sanctions under Executive Order 13608, issued last year, which “targets foreign sanctions evaders, including those that facilitate transactions for persons sanctioned in connection with Iran or Syria,” it said. The decision prohibits US citizens, permanent residents and companies from doing business with the airlines and restricts entry to the United States for some of their principals.