Transmissions from a Lone Star: The Curious Russian Afterlife of Steven Seagal

Long, long ago – for about 15 minutes – Steven Seagal was a big deal in Hollywood. His movie “Under Siege” made a lot of money. But that was pretty much it. Next came a string of big-budget flops followed by a lengthy and ongoing twilight spent in straight-to-video purgatory.

Long, long ago – for about 15 minutes – Steven Seagal was a big deal in Hollywood. His movie “Under Siege” made a lot of money. But that was pretty much it. Next came a string of big-budget flops followed by a lengthy and ongoing twilight spent in straight-to-video purgatory.

As for me, I don’t think I’ve ever made it all the way through a Seagal film. His stiff, tubby frame, extreme humorlessness and mystic posturing make it impossible for me to suspend disbelief. Here in the US he serves as a punch line, part of the flotsam and jetsam of trash culture. Steven Seagal – that’s the washed up ‘90s action movie guy who peddles an aftershave lotion named “Scent of Action,” right?

Indeed, Seagal has sunk so low that a few years ago he starred in an awful reality show named “Steven Seagal: Lawman,” which followed the bloated actor around Louisiana as he helped cops solve crimes. Seagal claimed to be some kind of reserve policeman. In one episode he drove a tank into the wall of a man’s home who was suspected of raising roosters for cockfighting. Soon afterward a member of Seagal’s SWAT team shot the fellow’s dog. A lawsuit ensued.

That wasn’t Seagal’s only bout of legal trouble in recent years. Shortly before the tank incident, he was accused of tricking female personal assistants into becoming his “sex slaves”, while last year a former business partner with known mafia connections took Seagal to court for not paying his debts. All of this scandal and absurdity tends to overshadow Seagal’s claim to be the reincarnation of Chungdrag Dorje, a 17th-century “treasure revealer” of Tibetan Buddhism – much to his frustration, I am sure.

Given all his trouble at home, it’s not difficult to understand why Seagal has been spending so much time in Russia lately. Back in March he opened a martial arts center in Moscow with Vladimir Putin himself. Putin of course is a big judo fan, and Seagal used to be a martial arts instructor. Watching the ceremony on TV, however, I was struck by Seagal’s fake goatee. It was on his face when he was with Putin, but subsequently vanished when he took to the mat for a demonstration of morbidly obese old-man judo. Mysterious; and yet Seagal’s disappearing beard drew no comment from journalists anywhere. 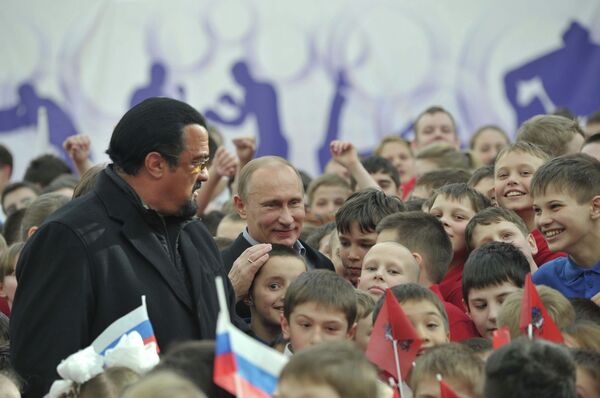 Then in May, Seagal (with beard) popped up in Chechnya, hot on the heels of fellow washed-up action dude Jean-Claude Van Damme and Russian patriot Gerard Depardieu. The republic’s leader Ramzan Kadyrov, who definitely looks like the kind of guy who enjoys Steven Seagal movies, declared the corpulent master of kung fu “almost a Chechen.”

But then last weekend things turned from surreal to tasteless as Seagal (without beard) showed up in Beslan, where over 380 people, including many children, died during the 2004 siege. According to a spokesman, Seagal declared that he would dedicate the rest of his life to “fighting terrorism,” though in what capacity remains unclear. On Tuesday, however, we received a hint as Russian Deputy Prime Minister Dmitry Rogozin revealed that he wanted to offer Seagal a job as a global sales rep for Russian weapons. A curious post for a Buddhist, but maybe – given all these lawsuits – he needs the cash. Not since Vaclav Havel offered Frank Zappa the position of cultural attache for the Czech Republic has a government made such a bizarre offer.

OK, OK, I get it that Putin and Seagal both love judo, but beyond that this slavish reverence on the part of officials of a major nuclear power for the star of “Gutshot Straight” has me concerned. I mean, if you’re going to start making faded action stars chinovniks, at least choose semi-decent ones like Schwarzenegger or Bruce Willis. Heck, I’d give Jason Statham a job before I’d hire the tank-driving reincarnation of a Tibetan lama.

Then again, I know from my time spent in Moscow that Russians really like cheesy B-movie actors such as Chuck Norris, Dolph Lundgren, et al. Back in the ‘90s, when major Hollywood stars largely stayed away, these hard-working second-raters were always willing to come over and attend events, open casinos and rub shoulders with the country’s new elite. They earned their love.

So maybe I should go easy on the star-struck Kadyrov as he proclaims his admiration for Steven Seagal. Maybe in Russia, people aren’t up on the scandals about dead puppies, alleged sex slaves, and the mafia stuff. On the other hand, when Seagal visited Beslan last weekend he did so in the company of a group of American congressmen. And I ask you, what was going on there? Didn’t one of them stop and think, isn’t this the guy who sells an energy drink named “Lightning Bolt” and who released an easy-listening album called “Songs from the Crystal Cave”? What the hell is he doing here?

May Mr. Seagal prosper and lead a long and happy life. But seriously, all you Russian and American politicians out there, it’s time to dial back the Seagal love a little.

What does the world look like to a man stranded deep in the heart of Texas? Each week, Austin- based author Daniel Kalder writes about America, Russia and beyond from his position as an outsider inside the woefully - and willfully - misunderstood state he calls “the third cultural and economic center of the USA.”

Daniel Kalder is a Scotsman who lived in Russia for a decade before moving to Texas in 2006. He is the author of two books, Lost Cosmonaut (2006) and Strange Telescopes (2008), and writes for numerous publications including The Guardian, The Observer, The Times of London and The Spectator.

Transmissions from a Lone Star: Is it Time for a Ladder on Everest?

Transmissions from a Lone Star: A Cascade of Trouble: Life in Obama’s Second Term

Transmissions from a Lone Star: Printed Guns: Probably Not the Next Big Thing

Transmissions from a Lone Star: Why Dictators Should Be Wary of Certain Animals

Transmissions from a Lone Star: Of Robots and Presidents

Transmissions from a Lone Star: The Other Koresh

Transmissions from a Lone Star: Are White Supremacists On The Rampage In Texas?

Transmissions from a Lone Star: Boris Berezovky: Game Over