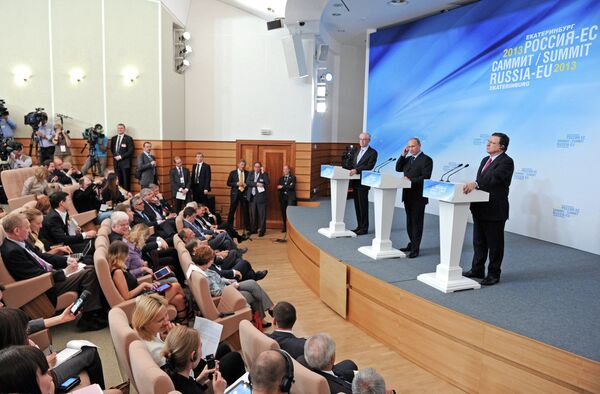 © RIA Novosti . Mikhail Klimenteev
/
Go to the mediabank
Subscribe
International
India
Africa
Russian President Vladimir Putin defended his country's sale of S-300 air defense systems to war-torn Syria on Tuesday, but said the contracts for the missiles have not yet been fulfilled.

YEKATERINBURG, June 4 (RIA Novosti) – Russian President Vladimir Putin defended his country's sale of S-300 air defense systems to war-torn Syria on Tuesday, but said the contracts for the missiles have not yet been fulfilled.

“We do not want to disturb the balance in the region,” said Putin during a joint press conference at the Russia-European Union Summit with European Union President Herman Van Rompuy and European Commission President Jose Manuel Barroso. “The contract was signed several years ago. It has not yet been realized."

Putin praised the capabilities of the Russian-made S-300s, which can engage 12 targets simultaneously at distances of 200 kilometers and heights of up to 27 kilometers.

“The S-300 systems are, really, one of the best air defense systems in the world – probably the best,” he said.

The shipment of S-300s to Syria is a continuing source of friction between Washington and Moscow. US Secretary of State John Kerry said last month that the presence of the weapons in Syria would be “destabilizing” for the region.

Putin also stressed that the deliveries of S-300s to Syria are legal.

Syrian President Bashar Assad suggested last week that the S-300 contracts with Russia would be fulfilled.

“Everything we have agreed with Russia will be implemented, and a part of it has been implemented already,” he said when asked about S-300s, according to Lebanon's Almanar television station.