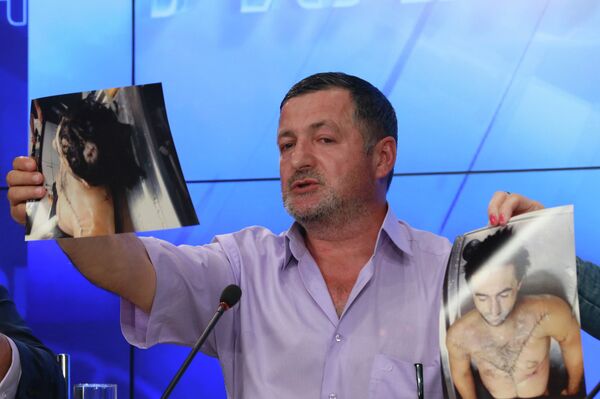 © RIA Novosti . Alexander Natruskin
/
Go to the mediabank
Subscribe
International
India
Africa
The father of Ibragim Todashev, who was shot to death last week by US authorities while being questioned about the Boston Marathon bombing suspects, said Thursday that his son was killed with a point-blank shot to the head, raising even more questions about an already murky case.

MOSCOW, May 30 (Alexey Eremenko, RIA Novosti) – The father of Ibragim Todashev, who was shot to death last week by US authorities while being questioned about the Boston Marathon bombing suspects, said Thursday that his son was killed with a point-blank shot to the head, raising even more questions about an already murky case.

“He was questioned for eight hours,” Abdulbaki Todashev told reporters in Moscow. “Then they shot him, six times in the body and once in the head.”

The May 22 shooting death has been cloaked in mystery, with US media raising questions early on about officials’ use of lethal force – a concern echoed by the dead man’s father.

“They could have wounded him, in the leg or the shoulder. But this is a killing with a ‘control shot,’” Todashev said, using the Russian phrase for a point-blank shot used by hit men to ensure their victim is dead. He also showed reporters photographs of what looked like his son’s bullet-riddled body, including one of a bullet wound to the head.

“I’ve only seen things like that in movies,” he said in an even, almost detached tone.

The FBI has said it is conducting an investigation into the incident. In emailed comments, Dave Couvetier, a spokesman for the FBI in the Orlando area, where the internal investigation is being handled, directed RIA Novosti to a Thursday statement on the FBI's website saying the bureau would not comment on details of the case until the ongoing internal review is wrapped up. It gave no time frame.
© APTN

On the day of the shooting, law enforcement officials had been questioning the younger Todashev at his home in Orlando, Florida, both about his relationship with Tamerlan Tsarnaev, the older of the suspected marathon bombers, and an unsolved 2011 triple murder in a Boston suburb. One of the victims had reportedly been a close friend of Tsarnaev’s and investigators were trying to piece together whether Tsarnaev and Todashev had been involved in the killing.

According to early media reports, including one in the New York Times, unnamed law enforcement officials said Ibragim Todashev had admitted to carrying out the murder with Tsarnaev, but then went “off the deep end” and attacked the investigators with an unidentified object – “a knife or a pipe or something” – and was killed before writing a confession.

The elder Todashev said Ibragim had never mentioned the murder case to him.

Ibragim, a 27-year-old native of Russia’s Chechnya region who had lived in America since 2008, met the bombing suspects, fellow ethnic Chechens Dzhokhar and Tamerlan Tsarnaev, in Boston, where he used to live, the father told reporters. (Earlier media reports had only linked Ibragim to Tamerlan.)

The three were mixed martial arts enthusiasts and used the same gym, but they were never close friends, the father said, adding that his son was a devout Muslim but not a fundamentalist.

Ibragim had never believed that the Tsarnaevs were behind the Boston bombings, which killed three and injured over 200 in April, his father said.

Abdulbaki Todashev also complained that the FBI had not provided his family with any information about Ibragim’s death. The photos he showed at the press conference, which seem to have been taken in a morgue or funeral home, had been obtained through contacts in United States, Todashev said.

“They are bandits, not FBI agents,” he said. He questioned the reasons for shooting his son in the back of the head, though stopped short of explicitly saying the agents deliberately killed him.

A US Islamic group called Thursday for an official investigation into the killing, saying it planned to file a formal complaint with the US Department of Justice.

The Todashevs fled war-torn Chechnya in the 1990s, settling in Russia’s Saratov region, a thousand kilometers to the north. They moved back to the Chechen capital Grozny in 2008, said the father, who now works in the city administration.

Ibragim Todashev, the eldest of 12 siblings, obtained permanent residency in the United States last March, his father said, adding that Ibragim was due to fly back to Russia for his first visit since 2008 on May 24.