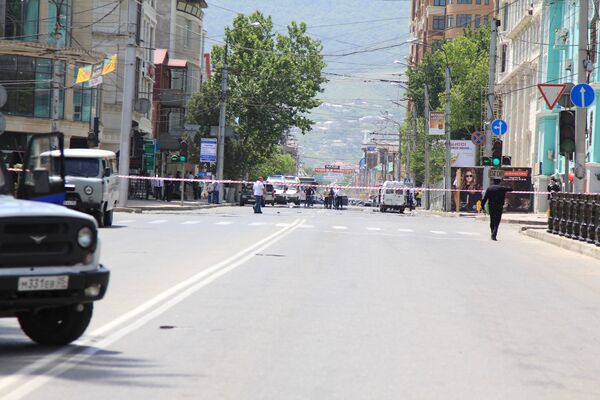 A female suicide bomber in Russia’s turbulent region of Dagestan blew herself up on Saturday injuring at least 15 people, including police officers, officials said.

MAKHACHKALA, May 25 (RIA Novosti) – A female suicide bomber in Russia’s turbulent region of Dagestan blew herself up on Saturday killing one and injuring at least 14 others, including police officers, officials said.

The attacker, later identified as a 25-year-old widow of two Islamic militants killed by security forces, attempted to target regional police headquarters in the capital of the North Caucasus republic of Dagestan.

Earlier reports put the number of injured at 12, but later the number mounted during the day to 15, including five police officials. A wounded woman died later in hospital.

Initial reports said one policeman died in hospital, but a spokesman for police in the North Caucasus republic later denied it. A cameraman with Russian state-run television station was slightly wounded.

Accroding to the witness accounts the bomber arrived to the scene in the city’s downtown by a taxi and started talking to a group of policemen before carrying out the explosion.

The bomber was identified by the anti-terrorist committee as Madina Aliyeva, who was married to rebels whose last names are Aliyev and Dzhapayev killed in separate shootout with security forces. The investigatior said that she had travelled abroad to meet active member of Islamist insurgency there while preparing for the attack.

Female suicide bombers are often called "black widows" in Russia because many are the widows of radicals in the North Caucasus region which remains volatile.

In a separate incident, an unidentified man shot and wounded two police officers who stopped him for a document check in Makhachkala late Friday, the Investigative Committee said. The attacker fled the scene.

On Monday, a twin bombing took place near the republican office of the Federal Court Marshals Service in Makhachkala, killing four and injuring 48.

(Updates number of wounded to 15, adds details about the bomber)