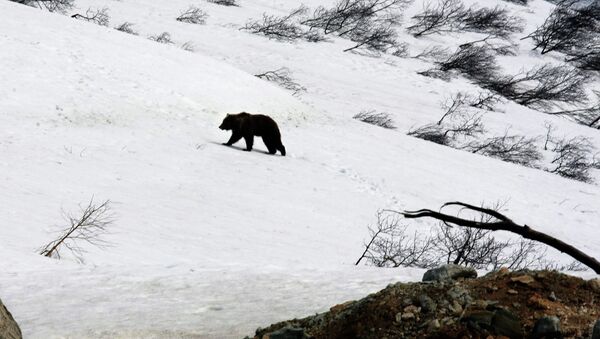 Bears may not roam the streets of towns and villages across Russia, but they can sometimes be spotted around cemeteries and highways.

MOSCOW/PETROPAVLOVSK-KAMCHATSKY, May 7 (RIA Novosti) – Bears may not roam the streets of towns and villages across Russia, but they can sometimes be spotted around cemeteries and highways.

Authorities in two regions residents have been on “bear alert” this week, killing at least three hungry animals which were desperately looking for food.

In Russia’s Far East, two bears were shot after they were spotted digging up graves and feasting at a local cemetery, regional police said on Tuesday.

According to the police statement, residents in the Russian region of Kamchatka told officials that they had seen three bears at a cemetery in the town of Yelizovo, “one of which was picking over a human body.”

The police inspected the scene and found that the animals had dug out a grave closest to the road and had even broken open a coffin.

Regional forest rangers killed two of the three animals, while the police advised locals to be cautious given the increased threat posed by bears in the area.

Local bears are particularly hungry after waking up from their winter hibernation and head to populated areas seeking food, the police said.

Kamchatka bears, the population of which is approximately 18,000 across the peninsula, are one of the biggest in the world. Adult male bears can grow to be three meters in length and weigh up to 700 kilograms.

In another incident, a hungry bear was shot in Yuzhno-Sakhalinsk, which is separated from the Kamchatka peninsula by the Sea of Okhotsk.

A spokesman for the local Korsakovsky forestry authorities told RIA Novosti on Tuesday that the bear was near a local highway “begging” for food from passing cars.

The forestry authority started receiving reports about the hungry bear last week and had to send an armed specialist to the Yuzhno-Sakhalinsk-Okhotskoye highway near the village of Vestochka.

“When we arrived at the location, we saw passing motorists feeding a bear by the highway and posing for pictures near it,” the spokesman said.

The spokesman explained that although they tried to scare the animal away by firing warning shots into the air and using fireworks, the deterrence achieved proved temporary, and on Sunday they took the decision to shoot the animal.

The Sakhalin region is inhabited by some 4,200 bears, which can live for up to 45 years.