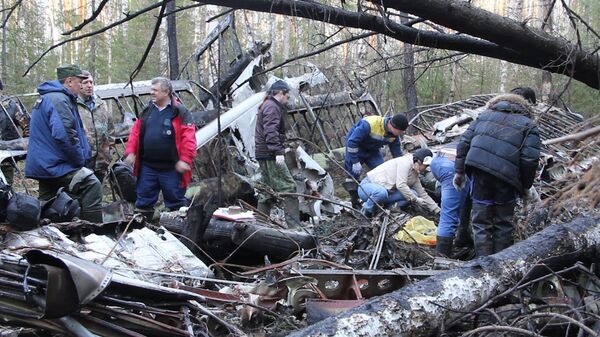 Investigators said Monday that they are now considering at least three possible scenarios for the plane crash that saw an Antonov An-2 with 13 people on board come down over Russia’s Urals mountains last June, after airplane wreckage was finally discovered.

MOSCOW, May 6 (RIA Novosti) – Investigators said Monday that they are now considering at least three possible scenarios for the plane crash that saw an Antonov An-2 with 13 people on board come down over Russia’s Urals mountains last June, after airplane wreckage was finally discovered.

Technical malfunction, pilot error and poor weather conditions are the three most likely reasons that could have caused the biplane to crash into the marshy forest just eight kilometers from the airport, transport investigators said Monday in a statement.

A criminal probe into the mysterious crash was re-opened Sunday, months after a massive search operation for the plane had been halted.

Local hunters accidentally stumbled across the wreckage in hard-to-access terrain.

The light An-2 aircraft, which was tasked with monitoring wildfires, went missing last June after being hijacked from the Urals airfield near the town of Serov by revelers who did not inform air traffic control.

Investigators previously suggested that the plane might have been stolen by the pilot and his drinking buddies for a fishing trip or a visit to the bathhouse.

Officials said on Monday that remains of all 13 missing people have been recovered from the crash scene.

One pilot and 12 passengers are thought to have been among those killed, including Serov’s chief of traffic police and his subordinate inspector.

Photos from the scene obtained by RIA Novosti featured a broken and burned frame of the plane lying on the ground between the woods and a heap of bones.

Anastasia Rogulina, whose sister Yulia Safonova died in the crash, has cast doubt on official reports about the find, saying that many questions remain unanswered.

"Judging by the video [from the scene], I can suggest that it had been dragged to that place and burned. There aren't even burned trees around it…” Rogulina said in an interview with the local Globus news portal on Sunday.

Sverdlovsk Region head Yevgeny Kuivashev has ordered compensation of 1 million rubles ($32,150) to be paid for each victim, the governor’s office said on Monday.

The search for the missing plane was halted in November 2012, due to bad weather conditions, and was expected to resume this spring.

The criminal case was opened on charges of the breach of flight safety rules and aircraft operation entailing the death of more than two people through carelessness.

Dubbed “ghost plane” by the press, the fate of the An-2 that went missing over the Urals taiga became one of the biggest modern mysteries in Russia.

During the search operation that covered thousands of kilometers, rescue teams even managed to find debris of a different An-2 and Mi-8 helicopter that went missing in the 1980s.