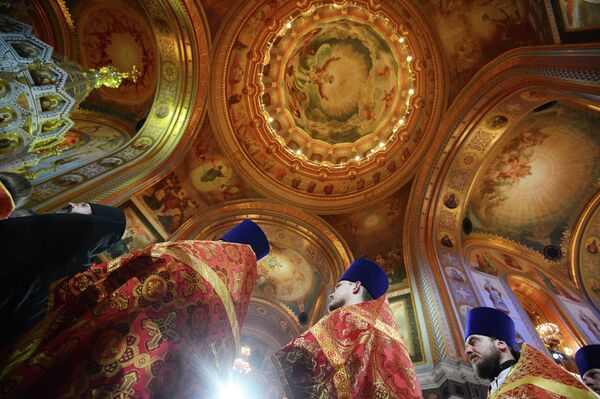 President Vladimir Putin congratulated Orthodox Christians and all Russians celebrating Easter with Christianity's most important and joyful feast, the Resurrection of Jesus Christ, the Kremlin press office said on Sunday.

“The Easter gives joy and hope to millions of people, inspires for good deeds and noble aspirations. It turns them to original spiritual values that play a special role in Russia’s history and feed the national culture,” the Kremlin press office quoted Putin as saying in his congratulatory letter.

Putin also praised the role of the Russian Orthodox Church in maintaining civil peace and accord in Russia and developing inter-confessional and inter-ethnic dialog.

“The Church incessantly cares about strengthening high moral and ethical ideals and family traditions in society and upbringing the younger generation. The Church does a lot to solve pressing social problems,” Putin said in his congratulatory letter.

The influence of the Orthodox Church in the country has been on the rise since the collapse of the Soviet Union, despite the fact that the Russian Constitution separates the church from the state.

A public opinion survey conducted by the Kremlin-backed pollster Public Opinion Foundation (FOM) last year showed 65% of Russians have confidence in the Church.

Putin and Prime Minister Dmitry Medvedev attended early on Sunday the Easter service in downtown Moscow's Christ the Savior Cathedral as Russia is celebrating Christianity's most important and joyful holiday.

Patriarch Kirill of Moscow and All Russia, who heads the Russian Orthodox Church, led the divine service.

In his Holy Liturgy, the patriarch cautioned against interpreting freedom as permissiveness, and called on believers to be guided more by spiritual rather than material values in their lives.

The Resurrection of the Savior symbolizes his victory over sin and death and the birth of a new world redeemed by his Passion.

After midnight and for the next 40 days after Easter Sunday, Orthodox Christians greet each other with "Christ is risen!" and the reply is "He is risen indeed!" followed by three kisses. They also exchange Easter eggs.

Preparation for Easter celebrations begins in the Russian Orthodox Church on Holy Saturday - the last day of Holy Week, also known in Russia as Passion Week. On that day, people come to churches in great numbers to have paschal cakes and eggs blessed by priests.

The Easter divine service starts shortly before midnight. At midnight, the solemn festive procession with crosses and icons starts, with priests and believers going around the church and glorifying the Resurrection. The procession is often attended by nonbelievers attracted by its splendor. The service lasts into the early hours of Sunday.