Putin On the Defensive in Annual Call-In Show (WRAP) 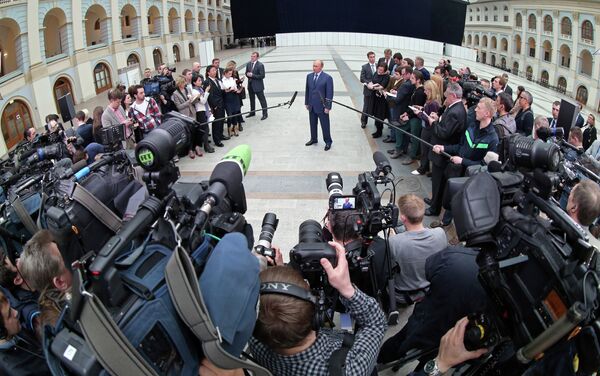 But he announced no major policy changes, shifting the blame for Russia’s economic troubles to regional authorities and businesses on the ground, dismissing accusations of persecuting the opposition, and criticizing US foreign policy.

The main theses of Putin’s conference, which saw more than 2.5 million questions submitted by phone, email and text message, included:

- On foreign affairs: The “imperialist policy” of the United States is the reason for the worsening of bilateral relations with Russia. The US Magnitsky Act that targets Russian officials accused of rights abuse was Washington “puffing its gills,” Putin said.

- On global terrorism: Russia is willing to work closer with the United States to counter the terrorist threat worldwide in the wake of the Boston bombing by Russia-born Islamists that killed three last week.

- On the alleged crackdown on the Russian opposition and independent NGOs: Putin denied any crackdown is being carried out, while chiding the opposition for lacking a constructive agenda and calling on NGOs to disclose the sources of their funding.

(More than two dozen opposition activists are currently on trial or under investigation in Russia on various charges, and the operations of many NGOs in Russia were recently halted by exhaustive bureaucratic checks, some of which led to hefty fines over paperwork technicalities and under a controversial new law that requires NGOs receiving foreign funding and engaged in political activities to register as “foreign agents.”)

- On the economy: No major changes to economic policy are on the cards.

(There are fears of a recession in Russia, where economic growth slowed to 1.1 percent of GDP in the first quarter of 2013, compared to 4.8 percent over the same period of the previous year.)

- On Prime Minister Dmitry Medvedev’s government, which is struggling with the economy and pension reform: Speculation about its dissolution are premature because the Cabinet was formed less than a year ago.

(Price and payment hikes are considered a major factor in the downward slide of Putin’s support ratings, which, though still at a relatively healthy 46 percent in March, have decreased 19 percent compared to 2009, according to the state-run Public Opinion Foundation.)

- On the anti-corruption crackdown: Putin endorsed the proposal to ban Russian officials from keeping their money in foreign banks, which is currently under review in the upper house of parliament.

- On the late tycoon Boris Berezovsky: Putin said he would not release two identical letters he received in recent months from Berezovsky, once his fierce critic. But Putin confirmed that the oligarch, who was granted asylum in the United Kingdom in 2003 and died in March, had sought pardon and permission to return to Russia, where numerous criminal charges had previously been brought against him.

- On army modernization: The fifth-generation T-50 fighter jet will enter service with Russia’s armed forces in 2016, a year later than planned.

Putin also said that Russia would never legalize marijuana, called the mayor of a town in the Siberian Omsk Region “a piglet” for avoiding a meeting with a local senior citizen, and declined to say whether he is happy.

“There were more sharp questions than usual, with Putin often on the defensive,” said Alexei Mukhin, head of the Center for Political Technologies, an independent for-profit think tank in Moscow.

Previous call-in shows, which Putin has held annually from 2000 to 2011 with the exception of 2004, focused more on the Kremlin’s achievements than on criticism of its policies, experts said.

“Nobody would have believed him if he had remained as complacent as before,” said Dmitry Oreshkin, an opposition-minded political analyst who used to sit on the Kremlin’s human rights council, an advisory body with a record of criticizing the authorities. 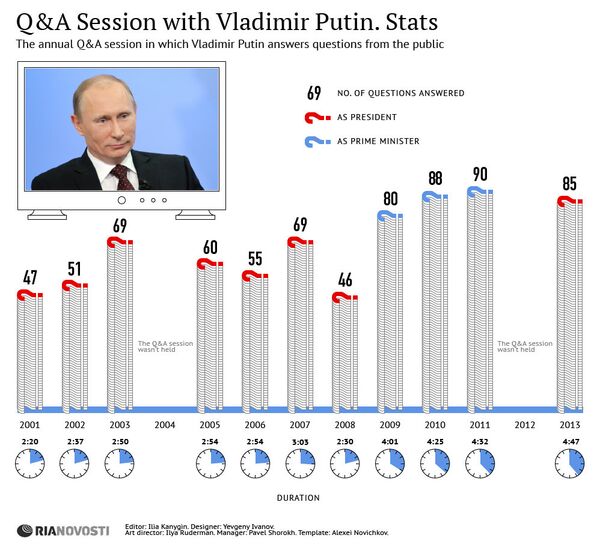 Putin’s willingness to face criticism on air was his reaction to the increasing activity of Russia’s civil society, Mukhin said. Russia saw the biggest opposition rallies in two decades, which began after State Duma elections in 2011 that were tainted by widespread allegations of electoral fraud and continued until after last year’s presidential elections, which were won by Putin among more fraud allegations.

Oreshkin said economic trouble and the public’s mounting discontent with the corrupt bureaucracy were also major factors in forcing the president to tackle thorny issues during the call-in show.

Putin was successful in projecting an optimistic message to the nation, but the effect will likely be short-lasting because corruption persists, economic problems continue to mount and utilities tariffs are rising, Oreshkin said.