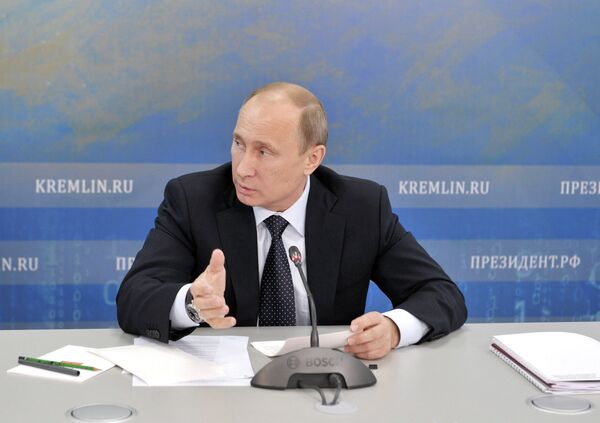 © RIA Novosti . Alexei Nikolski
/
Go to the photo bank
Subscribe
The year since Vladimir Putin’s return to the presidency for a third term has seen the Russian authorities introduce a string of restrictions putting the strongest pressure on civil society in the past two decades, Human Rights Watch said in a report released on Wednesday.

MOSCOW, April 24 (RIA Novosti) – The year since Vladimir Putin’s return to the presidency for a third term has seen the Russian authorities introduce a string of restrictions putting the strongest pressure on civil society in the past two decades, Human Rights Watch said in a report released on Wednesday.

The report, titled “Laws of Attrition: Crackdown on Russia’s Civil Society after Putin’s Return to the Presidency,” came out the day before Putin was due to hold his annual televised call-in show on Thursday afternoon. The show might also include questions from viewers about the laws passed during the first year since his return to the Kremlin last May.

“The new laws and government harassment are pushing civil society activists to the margins of the law,” Hugh Williamson, Europe and Central Asia director at Human Rights Watch (HRW), said in a statement. “The government crackdown is hurting Russian society and harming Russia’s international standing.”

In the last year, the Russian authorities have introduced legislation that includes the so-called “foreign agents” law, the “Dima Yakovlev law” banning US adoptions of Russian children, the treason law and the assembly law.

The treason law broadens the legal definition of treason, making it more suitable for prosecuting those involved in international human rights advocacy, the report claimed.

The so-called “foreign agents” law requires organizations that receive foreign donations and take part in political activities to register as “foreign agents.” To Russians, that term carries strong historical overtones of spying. A separate law passed late last year prohibits funding from the United States for “political” activity by NGOs, and bans groups whose work is “directed against Russia’s interests.”

Russian officials have repeatedly maintained that the new legal initiatives are needed to stop foreign governments from meddling in Russia’s affairs.

A separate new law on assemblies imposes limits on public demonstrations and introduces huge fines for those violating the law. Rights activists claim it is intended to intimidate anti-Kremlin activists.

The report also documents the recent nationwide wave of inspections of the offices of hundreds of NGOs by state officials, including prosecutors.

At least two NGOs have been accused by officials of failing to register as “foreign agents,” and many others have been fined on unrelated grounds such as fire safety or air quality violations, HRW said.

The inspections continued on Wednesday, with state officials visiting the Moscow office of the Levada Center independent pollster over its use of foreign funding.

The NGOs targeted have described the inspections as extraordinary in scale, although prosecutors and Putin himself have dismissed them as “routine.”

In addition, HRW noted that libel, which was decriminalized at the end of then-President Dmitry Medvedev’s term, was made a criminal offense again several months later under Putin. Internet content has been subjected to new legal restrictions that HRW says might threaten freedom of information in the country.

The HRW report is being released together with Amnesty International’s report “Freedom Under Threat: The Clampdown on Freedom of Expression, Assembly and Association in Russia,” which also condemns what it says is Russia’s harassment of civil society.

Both Amnesty International and Human Rights Watch have been subject to state inspections.

Rachel Denber of HRW told reporters on Wednesday while presenting the report in Moscow that "it remains unclear what will happen next."

Her colleague Tatyana Lokshina suggested that NGOs might simply be swamped with fines, which would be enough to put an end to their work in Russia.

The Kremlin's spokesman, Dmitry Peskov, was not immediately availabe to comment on the reports on Wednesday afternoon.