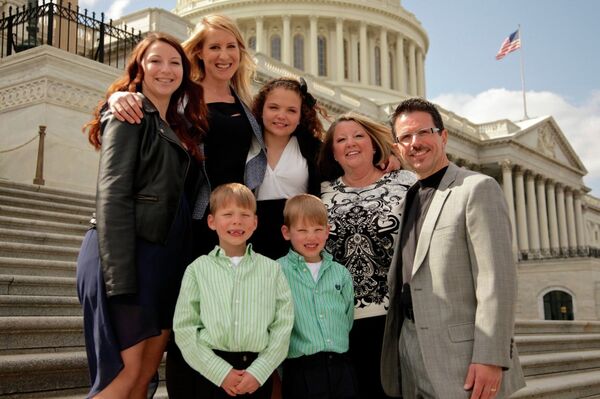 © Photo : Double Bounce Films
Subscribe
The first time Claudio Diaz hugged the Russian girl he and his wife would soon adopt, he says, “It was like hugging a cardboard box.”

WASHINGTON, April 24 (By Maria Young for RIA Novosti) – The first time Claudio Diaz hugged the Russian girl he and his wife would soon adopt, he says, “It was like hugging a cardboard box.”

His wife Cheryl remembers that 11-year-old Masha from the Arkhangelsk region of Russia was “stiff as a board.” And yet, the Wisconsin couple and their 14-year-old biological daughter, Cami, had no doubt that Masha and two other Russian orphans, 5-year-old twin boys, Marcel and Vadim, from the same region, were meant to join their family.

“The first time we ever saw the kids, we all met at Masha’s orphanage. The boys were brought on a bus from their orphanage and they were scared and crying and my heart just melted,” said Cheryl Diaz in an interview with RIA Novosti.

Months after that awkward beginning, the adoptions were finalized and in October 2011 the family began a journey from Russia that tens of thousands of other American families have taken with varying degrees of success: trying to make a home and a life with a child they may love but really don’t know.

The deeply intimate process is laid bare in “The Dark Matter of Love,” a documentary shown for the first time in the United States to an audience of adoption advocates at the US Capitol in Washington Monday night.

It is director Sarah McCarthy’s up close and personal look at the science behind the parent-child relationship, and a rare opportunity to watch human bonding that would normally take years unfolding in a matter of months.

“There was this fairy tale period and that ended pretty quickly and then I think the Diaz parents sort of said, ‘This is going to be really difficult, parenting kids from these backgrounds,’” McCarthy told RIA Novosti. 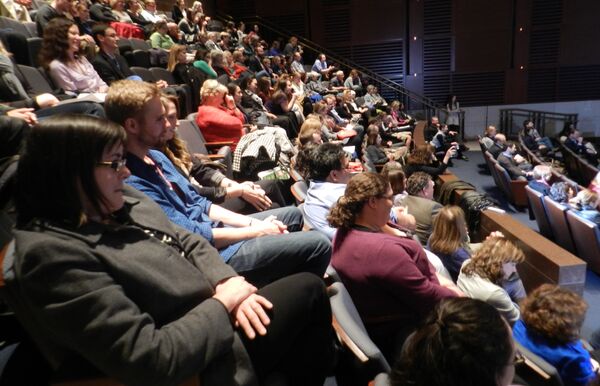 An estimated 200 spectators turned out for the film’s first US showing
© RIA Novosti . Maria Young

Eager to explore what she called the “mechanics of love through a scientific lens,” McCarthy turned to attachment specialist Robert Marvin, a pediatric psychologist and director of the Mary D. Ainsworth Child-Parent Attachment Clinic in Charlottesville, Virginia, to guide the Diaz family’s adoption transition, a process that started even before the children came to America.

The film shows Marvin watching video clips of the excited parents and wondering aloud, “They have a very idealized view of what’s going to happen, and if it doesn’t turn out, are they going to crash?

“Families who go into adoption with the kind of preparation that’s available do far better than families who figure, ‘Look, I was a kid once, I’ve been a parent before, I can do this,’” said Marvin in an interview with RIA Novosti.

For the Diaz family none of it was as easy as they thought it would be.

“They spit all over the ground, they threw tantrums,” said Claudio Diaz of his young sons. “It was tough.”

In the early days and weeks following the fairytale adoption, he said, “The reality of how hard this was going to be really hit.”

Masha was withdrawn and unemotional, and Cami was resentful of the attention that was going to her new siblings, with new expectations for her to be the older, responsible one.

Cheryl Diaz remembers crying – a lot – and wondering if they had made a huge mistake.

“I think Claudio was ready to give up. He said, ‘Why did we get these kids?’” she said. “When you get them away from the orphanage and there’s a language barrier, and you’re trying so hard to bond and it just seems like they hate you, it’s just hard. You can see where someone could lose their temper, lose control, but you just have to go through this hard period.”

In time, with guidance and therapy, the individual Diaz members became a family unit. The boys calmed down and learned how to follow the rules as well as other rambunctious young boys. Masha began to trust her family, surprising them with a solo performance in a school musical. And she and Cami began to act more like sisters than distant strangers.

That transition eventually happens for most – but not all – of the families who have adopted. But US-Russian adoptions have been fraught with problems and a handful of tragedies have led to international scrutiny and a ban imposed by the Russian government on all adoptions by American parents.

While the research to help adopting families is available, Marvin said, “We have lots of work to do to ensure the greatest opportunity for success. The hope is that this film and the efforts surrounding it will help lead to policy change and greater resources.” 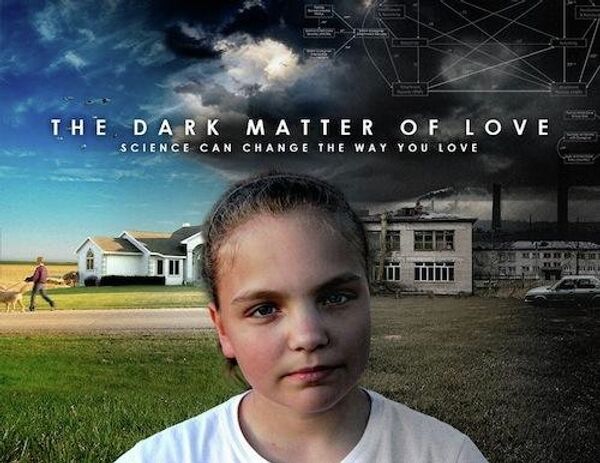 “The Dark Matter of Love” follows Masha from Russia to a new home in Wisconsin
© Photo : Double Bounce Films

McCarthy hopes the film will also help raise the profile of hundreds of Russian children in orphanages now and the American families who were in the process of adopting them when the ban was imposed.

“I saw Masha meet her mum for the first time, and from then on, the orphanage director said every day Masha was asking, ‘Are they still coming back for me? Do they still want me?’ And the thought that every day all of these kids are asking those same questions, it just breaks my heart,” she said.

McCarthy is also hoping to have the Russian premiere of “The Dark Matter of Love” at the Moscow International Film Festival in June this year, and is pursuing other plans to show the film in the US and Russia.

For Cheryl and Claudio Diaz, the hope is that the film will be a learning tool that will guide other adoptive families in their own successful transitions.

“It was hard to cry in front of people but the point was for people to see that it wasn’t just a piece of cake. But if you stick with it, all this hard work pays off in the end,” Cheryl Diaz said during a question-and-answer session after the showing.

Masha, now 13 and in 7th grade, had her own message for the audience.

“I love my family now, the boys are doing better,” she said. Then, to the amusement of the crowd, looking at her squirming little brothers, she added, “You know, still having some problems.”

Before the evening ended, Cami, now 16, wanted to make one thing clear.

“That was then, this is now, and now we are a family. Masha and I, we’re tight. We’re good buds,” she said. “Bonding takes a long time but it happens and it’s great.”