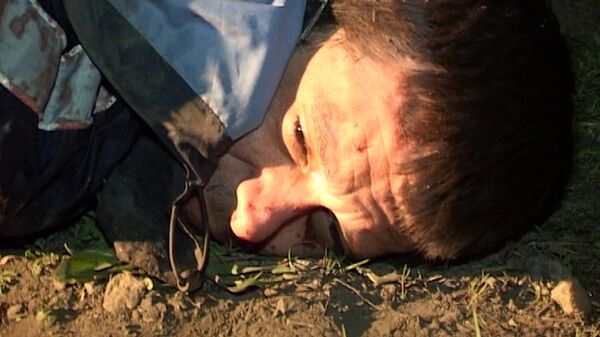 © MOI Russia
/
Go to the photo bank
Subscribe
Police in southwest Russia detained on Tuesday the man suspected of shooting six people dead in the city of Belgorod, the Interior Ministry said.

“The suspect was arrested during the attempt to flee the cordoned-off area on a cargo train,” a ministry spokesman told RIA Novosti.

A man opened fire at random victims on Monday afternoon with a rifle in a hunting store before moving onto the streets in the center of Belgorod and continuing the shooting spree. He later fled in the same vehicle in which he had arrived at the scene.

Pomazun was detained by four police officers who were patrolling the area adjacent to the Belgorod railway station. One of them sustained knife wounds to the head during the detention. He has been taken to hospital and operated on, but his current condition is unknown. The suspect sustained no injuries.

The three officers told journalists that on Tuesday evening they saw a person walking towards the railway station, whose description matched to that of the suspect. The man acted suspiciously during an identity check.

“He said he had no documents on himself and gave a false surname,” one of the officers, who took part in the operation, said in an interview shown on Rossiya 24 news channel.

“When other officers came closer, he started acting nervously, raising even more suspicion,” the police said.

He said the man held a knife in his hand, but it was covered by a sleeve of his jacket. He stabbed one of the officers and tried to flee, but was detained.

A spokeswoman for the region’s Investigative Committee department, Yelena Kozyreva, said Pomazun “has already started to give testimony.”

She added that he will undergo psychiatric examination soon.

A two-day period of mourning was declared in the city on Tuesday. Funeral ceremonies for the victims will be held on Wednesday.

Recasts throughout, adds information in paras 4-12