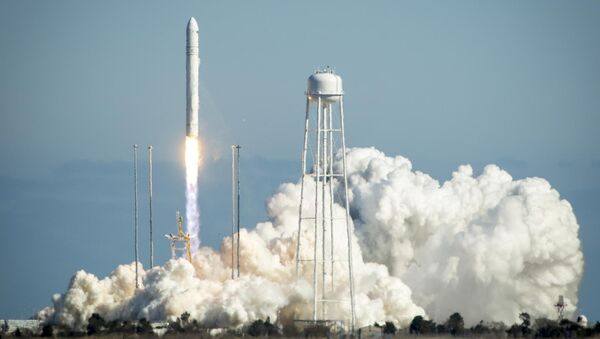 The Antares rocket, designed in US to carry a commercial space freighter to the International Space Station (ISS), blasted off early on Monday Moscow time from the launch pad in the Wallops Island.

MOSCOW, April 22 (RIA Novosti) - The Antares rocket, designed in US to carry a commercial space freighter to the International Space Station (ISS), blasted off early on Monday Moscow time from the launch pad in the Wallops Island.

The launch from NASA's Wallops Flight Facility, broadcast live on NASA website, is the first-ever for Antares and also the first for the launch pad. The 40-meter (over 130 feet) tall rocket is a joint development project between NASA and Virginia-based Orbital Sciences Corporation.

The Antares, initially known as Taurus II, is an expendable launch vehicle with a maximum payload of 5,000 kilograms. It is expected to deliver Cygnus unmanned spacecraft to the International Space Station for NASA, which has no low Earth orbital spacecraft after the retirement of the Space Shuttle in 2011. NASA has since relied heavily on Russia's Soyuz spacecraft to ferry astronauts and cargo to and from the space station.

"Today's successful test marks another significant milestone in NASA's plan to rely on American companies to launch supplies and astronauts to the International Space Station, bringing this important work back to the United States where it belongs," NASA Administrator Charles Bolden was quoted as saying in a NASA statement.

"In addition to providing further evidence that our strategic space exploration plan is moving forward, this test also inaugurates America's newest spaceport capable of launching to the space station, opening up additional opportunities for commercial and government users,” he added.

The blastoff was initially scheduled for April 17, but was postponed twice this week, first after a connecting cable came loose on Wednesday and then due to unfavorable wind conditions on Saturday.

Some ten minutes and three seconds into the flight, at the height of at least 250 km (155 miles) an imitation of the Cygnus spacecraft, equipped with numerous flight data recording systems, separated from the rocket.

The successful test paves the way for a future Cygnus flight to ISS.

The rocket also put into orbit four satellites of the CubeSat standard.

Under a $1.9 billion contract with NASA, Orbital Sciences is to conduct a total of eight resupply missions to the ISS.