US Set to Publish Magnitsky List With Deadline Ticking 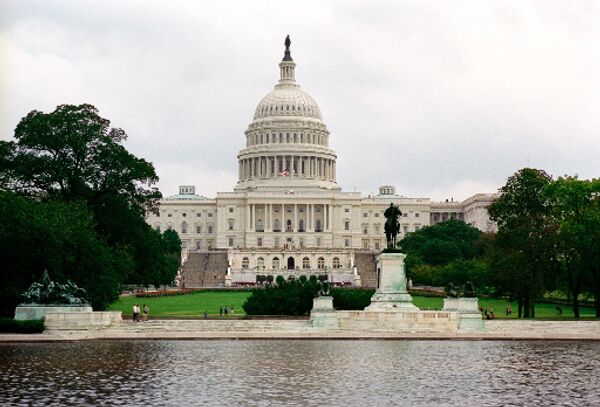 The United States on Friday is expected to release a list of Russian officials to be slapped with visa and financial sanctions under the Magnitsky Act, a US law targeting Russian officials suspected of human rights abuses that has incensed Moscow over what it sees as Washington’s meddling in its internal affairs.

WASHINGTON, April 12 (RIA Novosti) – The United States on Friday is expected to release a list of Russian officials to be slapped with visa and financial sanctions under the Magnitsky Act, a US law targeting Russian officials suspected of human rights abuses that has incensed Moscow over what it sees as Washington’s meddling in its internal affairs.

The administration of US President Barack Obama is required by law to publish the so-called Magnitsky List by Saturday, and Russia has vowed to respond with its own blacklist of American officials.

Members of the US Congress who pushed the Magnitsky Act through last year as part of a landmark bill normalizing trade relations with Moscow have called on the White House to include senior Russian officials on the list, including Chechen President Ramzan Kadyrov and Russian Investigative Committee head Alexander Bastrykin.

The Magnitsky Act was signed into law by Obama on Dec. 14 and is ostensibly designed to punish officials believed to be connected to the death in a Moscow jail of whistleblowing Russian lawyer Sergei Magnitsky in 2009. The scope of the legislation was later broadened to cover a whole range of suspected rights abusers.

Obama was initially against the Magnitsky Act and his administration advocated punishing those allegedly involved in Magnitsky’s death through existing sanctions and frameworks.

The White House was also reluctant to attach the Magnitsky Act to the trade legislation in what many saw as an attempt to shield US-Russian cooperation in areas like counterterrorism and arms control from the diplomatic fallout with Moscow over the sanctions.

The legislation requires the White House to publish the list within 120 days of the enactment of the law, and the Obama administration has held off on fulfilling that requirement until the final day before the Saturday deadline.

Last week the White House formally delegated key aspects of the law’s implementation to the US State and Treasury departments. This includes the mandate to publish the Magnitsky List in the Federal Register, which Obama tasked the State Department with handling.

White House National Security Council spokeswoman Caitlin Hayden told RIA Novosti this week that the delegation was not an attempt to distance the US president from the controversial law but rather a “routine” assignment of duties lower agencies.

US Rep. James McGovern has submitted 280 names to the White House to be considered for inclusion on the Magnitsky List, including Kadyrov and Bastrykin.

The Magnitsky Act gives the White House the power to classify the names of Russian officials on the list of sanctioned officials in the interest of national security, so the list to be published before the Saturday deadline may not indicate all of the individuals to be targeted by the sanctions.

A Congressional source told RIA Novosti this week that the law’s backers in Congress would consider a classified list of sanctioned Russian officials as good as no list at all.

A key component of the Magnitsky Act is the “name-and-shame” impact it would have on the targeted Russian officials, which would be undermined should the Obama administration choose to create a classified list, the source said on condition of anonymity because he was not authorized to discuss the law with the media.