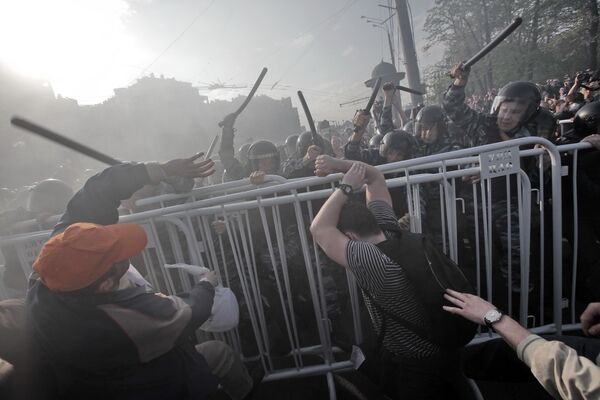 The mass riots took place at a Moscow protest rally on the eve of Vladimir Putin’s inauguration last May for a third presidential term. The rally ended in violent clashes between protesters and the police. Over 400 people were arrested and scores were injured when protesters briefly broke through police lines in a bid to take their protest to the Kremlin walls.

“On April 10, 2013, as part of a probe into the [riots] criminal case, investigators in the [southern] city of Volgograd conducted searches at the places of participants of a training camp organized in August 2012 by the accused, Sergei Udaltsov, and other people,” the Investigative Committee said in a statement Wednesday.

“Objects and documents having importance for the case were seized,” the committee said. “The camp participants were then questioned as witnesses.”

Earlier regional police spokeswoman Svetlana Smolyaninova told RIA Novosti that police searched the homes of Left Front activists in Volgograd. She did not specify what case the searches were connected with.

Left Front leader Udaltsov, two other activists Leonid Razvozzhayev and Konstantin Lebedev and Georgian lawmaker Givi Targamadze have been charged with organizing the riots. Lebedev recently admitted his guilt – a move that may end his house arrest.

Udaltsov is under house arrest. Razvozzhayev remains in custody. Targamadze has reportedly been put on an international wanted list at Russia’s request. One of the May 6, 2012 protest rally participants, Maxim Luzyanin, was sentenced last November to four and a half years in prison for fighting with the police.