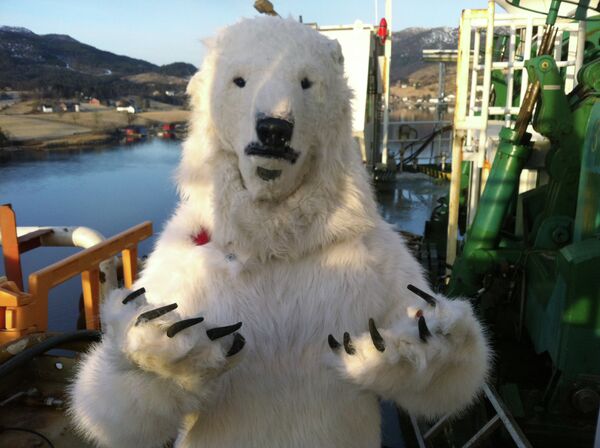 Taking the crusade for a drill-free Arctic from the Moscow River to the fjords of western Norway, Greenpeace’s polar bears on Wednesday boarded a Norwegian oil rig set to depart for the Barents Sea.

MOSCOW, April 10 (RIA Novosti) – Taking the crusade for a drill-free Arctic from the Moscow River to the fjords of western Norway, Greenpeace’s polar bears on Wednesday boarded a Norwegian oil rig set to depart for the Barents Sea.

Three activists dressed as bears climbed aboard the Statoil-chartered rig West Hercules in the port of Olen and spent some three hours there, a spokesman for Greenpeace Russia said.

The crew was amiable and even offered to show them West Hercules’ safety equipment, though Statoil ultimately prohibited them from doing so, Roman Dolgov told RIA Novosti by telephone from Olen.

In the end, the “bears” were escorted ashore. A Statoil spokesman said the company was not planning to take legal action against them.

Norway’s state-run oil monopoly Statoil intends to drill a well this summer by Bear Island in the Norwegian Svalbard archipelago, which would be the northernmost oil well in history.

The company also plans to work in the Russian Arctic together with Russia’s Rosneft, whom Greenpeace blamed last year for a quarter of all oil spills in the world.

Greenpeace and Norwegian media both reported Wednesday that Statoil is postponing West Hercules’ voyage to the Barents Sea until 2014.

But the Statoil spokesman, Ola Anders Skauby, told RIA Novosti that “this rig will start drilling in the Barents Sea in the next weeks.”

“This is the area that has been opened by the authorities. We are well prepared and have an emergency response plan,” Skauby said.

He did not elaborate on the plan, while Dolgov said no technology currently exists for the efficient clean-up of oil spills under ice.

Other foreign companies are joining the race to drill in the Russian Arctic, with Shell signing a memorandum with Gazprom this week, while ExxonMobil has been discussing plans to explore Russia’s Arctic shelf with Rosneft since 2011.

Greenpeace has deployed “bears” in defense of the Arctic before, most recently on April 1, when an activist dressed as a polar bear paddled down the Moscow River to the Kremlin on a raft to protest plans for Arctic drilling. He was briefly detained by police, but eventually walked free.

Greenpeace has also launched an online petition calling on Norway’s Prime Minister Jens Stoltenberg to stop Statoil from tapping into the Arctic. The petition had 21,000 signatures as of Wednesday afternoon.

Another Greenpeace petition in defense of the Arctic gathered 3 million signatures last year.

The organization also stormed a Gazprom oil rig last year that was poised to drill in the Pechora Sea, with activists hanging onto its walls for hours as the crew soaked them with cold water and pelted them with heavy objects.

Gazprom put its plans for the Arctic on hold following the attack.

(An earlier version of the story mistakenly said that Statoil planned legal action against Greenpeace.)