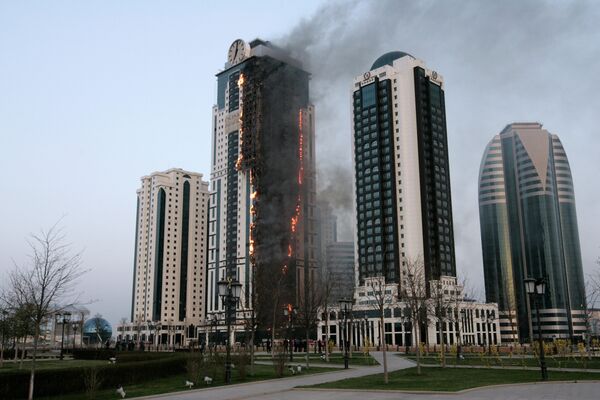 The fire that broke out in the tallest skyscraper of Chechnya’s capital Grozny on Wednesday evening was put out early on Thursday, a spokesman for the republic’s emergencies service told RIA Novosti.

GROZNY, April 4 (RIA Novosti) - The fire that broke out in the tallest skyscraper of Chechnya’s capital Grozny on Wednesday evening was put out early on Thursday, a spokesman for the republic’s emergencies service told RIA Novosti.

According to the emergencies service, the blaze has damaged an area of more than 14,000 square meters. It has completely destroyed the plastic trimming used on the building’s exterior, but the interior remained untouched.

At about 6 p.m. on Wednesday, clouds of black smoke engulfed the tallest building of the Grozny City complex, a 40-story apartment building, which boasts the world’s largest round clock. The record-breaking clock remained intact and kept showing correct time for two hours but stopped at 8:30 p.m. local time [4:30 p.m. GMT].

According to preliminary information, the blaze was caused by a short circuit. The fire spread rapidly to all floors of the skyscraper except the first one.

More than 100 firefighters and 16 fire engines were battling the blaze. However, the upper floors of the building, the tallest in Russia outside Moscow, could be reached only by helicopter.

The North Caucasus Regional Center of the Russian Emergencies Ministry, based in the resort city of Zheleznovodsk in southern Russia’s Stavropol Territory, ruled out the possibility of using its helicopters in firefighting efforts at night.

The center’s deputy chief Alexander Barsuk said helicopters could only operate there in daylight, because the buildings are close to each other and it was too dangerous for a helicopter to fly there in poor visibility.

No one was killed or injured in the fire, but dozens of people were evacuated from the 145-meter (475-foot) skyscraper and nearby buildings.