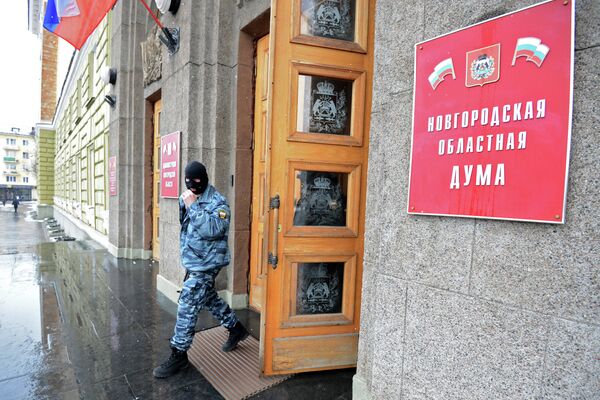 The Russian Investigative Committee opened several criminal cases on Tuesday against a group of people in central Russia’s Veliky Novgorod Region suspected of misappropriating half a billion rubles ($16 million) of budget funds allocated for road maintenance.

The Interior Ministry said in a statement that the criminal group, which acted between 2011 and 2012, was led by the “first deputy head of the Novgorod administration and a big-shot businessman.”

Earlier on Tuesday investigators opened a criminal case against Arnold Shalmuyev, first deputy governor of the Veliky Novgorod Region, accusing him of abuse of office and coercion.

Later in the day his case was joined with another criminal case over 35-million-ruble fraud of funds for road maintenance in the region, which involves two local lawmakers, Anatoly Petrov and Nikolai Zakaldayev among, other suspects.

Regional prosecutor Andrei Kikot said a total of nine people are currently suspects in the fraud case, including Shalmuyev.

According to investigators, budget funds allocated for road maintenance in 2011 were transferred to fly-by-night companies through the Magistral company, which was controlled by the criminal group. The money was later cashed and shared between group members. Consequently, some 150 million rubles ($4.8 million) were stolen that year.

The criminal group changed the scheme in 2012, the Interior Ministry said. That year, an independent entrepreneur won the tender for road maintenance in the region and signed a 355-million-ruble ($11.4 million) contract. However, Shalmuyev coerced him into foregoing the contract in favor of the Veche company.

The Veche company later concluded road maintenance deals with a dozen contractors, whose executives were forced to pay 10 percent of the contract sums in "kickbacks" to members of the criminal group.

Policemen and investigators conducted on Tuesday over 40 searches in the Veliky Novgorod regional administration, as well as in the suspects' homes, as part of the investigation.

Russia’s Channel One reported that Shalmuyev was taken to a hospital, allegedly with a suspected heart attack, after law enforcers searched his house.