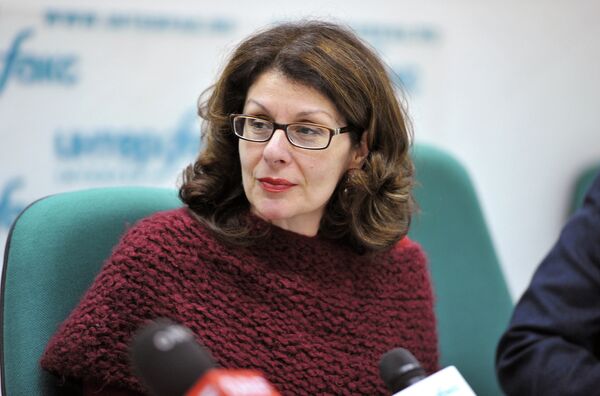 Russian state officials continued a wave of raids on prominent rights organizations on Wednesday that activists describe as a renewed pressure campaign against non-governmental organizations in the country.

MOSCOW, March 27 (RIA Novosti) – Russian state officials continued on Wednesday a wave of raids on prominent rights organizations, including Human Rights Watch, which activists describe as a renewed pressure campaign against non-governmental organizations in the country.

Rachel Denber, deputy director of the Europe and Central Asia Division of Human Rights Watch speaking by telephone from New York, said that the “wave of inspections … can only be seen as an effort to create a more menacing environment for organizations seen as involved in advocacy” and rights work.
Agora, which has provided legal support to many political activists, including the Pussy Riot punk band, said its director, Pavel Chikov, had been summoned to the prosecutor’s office in Tatarstan. The officials also asked for records of the NGO’s activities, registration and funding.

“We don’t plan to provide any. In our written response, we explained that we consider those demands illegal,” Agora’s representative Ramil Akhmetgaliyev, a lawyer, told RIA Novosti on Wednesday, citing a law on prosecutors.

Nationwide NGO inspections have been taking place since last month. The raids appear to be connected with a new law that tightens control on NGOs and obliges those that receive foreign funding to register as “foreign agents.” Many activists have commented on the thoroughness of the surprise inspections.

NGOs that are branches of foreign organizations do not have to register under the “foreign agent” law, but the more recent, so-called Dima Yakovlev law, which bans adoptions of Russian children by Americans, also introduces tighter regulations on all NGOs in Russia, Akhmetgaliyev said.

As of Wednesday, Agora said it was aware of 89 organizations having been audited in 24 regions across Russia during the recent wave of checks. According to the NGO, the checks also touched organizations dealing with HIV, environment protection and education.

An Effect on Foreign Relations?

Earlier this week, state agencies confiscated a stack of documents from the offices of Amnesty International and also paid a second visit to the Memorial rights group. In addition, among those targeted this week were two German organizations: the Friedrich Ebert Foundation (FES) and the Konrad Adenauer Foundation (KAS), a political think tank with ties to Chancellor Angela Merkel's Christian Democratic Union party.

This prompted German Foreign Minister Guido Westerwelle's office to say that the audits could have "a sustained effect on bilateral relations," Süddeutsche Zeitung reported on Tuesday.

Prosecutors also confiscated computers from the KAS, citing the need to check whether the installed software was legal.
The Russian branches of the German foundations were not set up to cause "confrontation," but to promote "bilateral relations," Schmidt said in a phone interview with RIA Novosti.

Rudolf Traub-Merz, head of the Moscow branch of the Friedrich Ebert Foundation, told RIA Novosti that according to his colleagues, “there have been no checks of this kind in the past 13 years."

Several regional offices of the French l'Alliance Française, an international organization promoting French language and culture, were also among those inspected.

Philippe Lalliot, a spokesman for the French Foreign Ministry, said at a news briefing on Wednesday that the ministry had sent an inquiry to the Russian Embassy in Paris in the morning, asking for an explanation of the inspections.

European Union Foreign Policy Chief Catherine Ashton said in a statement on Tuesday that she found the NGO inspections in Russia “worrisome because they seem to be aimed at further undermining civil society activities in the country.”