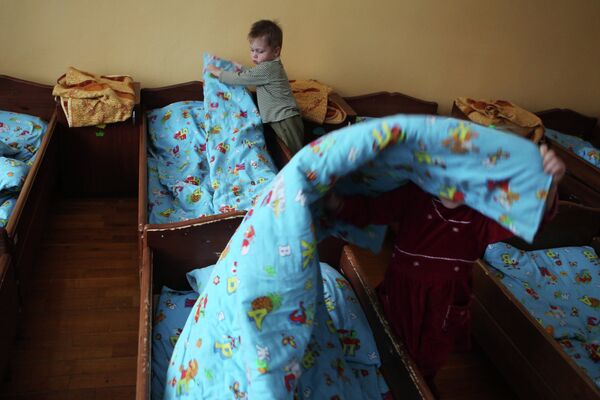 Russia's Foreign Minister called Friday for tougher requirements for foreigners wishing to adopt Russian children and demanded that US authorities prosecute a couple alleged to have abused their four adoptive children.

“We consider it necessary to tighten the procedure for the selection of those seeking to adopt [Russian children],” Foreign Minister Sergei Lavrov said at a meeting in the lower house of the Russian parliament, the State Duma.

The standards of adoption agencies should also be raised, he said.

Lavrov proceeded to say that Moscow has demanded that authorities in the US state of Wisconsin prosecute the adoptive parents of four children from Russia, known by their Russian surname as the Zhivodrovs, for allegedly repeatedly subjecting them to violence.

“The [US] federal authorities are not giving us any documents; the investigation is not yet finished. But we have appealed directly to the Wisconsin authorities. We were given an incomplete set of documents, but they make it clear that the adopted children were systematically subjected to violence,” Lavrov said.

Russia has recently raised the alarm over the purported mistreatment of Russian children adopted by foreign nationals, in particular in the United States.

On Tuesday, the ministry criticized the decision by Texas prosecutors not to charge the adoptive parents of a Russian toddler who died in January.

Prosecutors in Ector County, Texas, said Monday that Alan and Laura Shatto, the adoptive parents of Max Shatto (also known under his Russian name Maxim Kuzmin) would not face charges as there was no evidence that either of them had committed a crime. Three-year-old Max Shatto died on January 21, almost three months after he and his younger brother were adopted from a Russian orphanage in the Pskov region.

The death came just weeks after Russia enacted a ban on Americans adopting Russian children. Russian officials blame American adoptive parents for the deaths of 20 Russian children in the United States during the past two decades.

The ban was part of Russian legislation passed shortly after Washington adopted the so-called Magnitsky Act, which introduced sanctions against Russian officials suspected of human rights abuses. A spokesman for President Vladimir Putin said the Magnitsky Act had triggered the adoption ban.