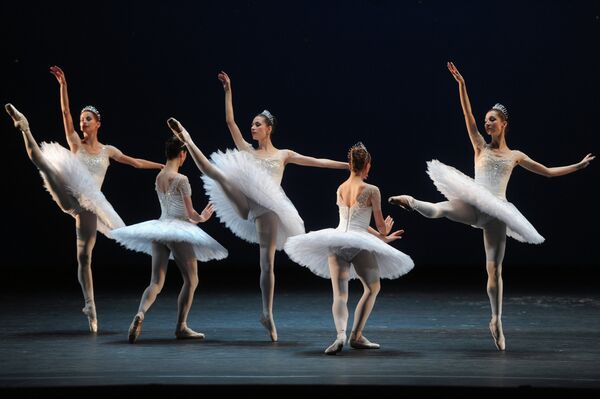 © RIA Novosti . Ilya Pitalev
/
Go to the photo bank
Subscribe
The Bolshoi Theatre said Monday that it is undecided on how it will react to incendiary claims that it provides ballerinas as escorts to wealthy Russian businessmen.

MOSCOW, March 18 (RIA Novosti) – The Bolshoi Theatre said Monday that it is undecided on how it will react to incendiary claims that it provides ballerinas as escorts to wealthy Russian businessmen.

Former Bolshoi star Anastasia Volochkova, who was fired from the theatre in 2003, reportedly for being overweight, made the allegation in a talk show appearance on Russia’s NTV channel on Sunday.

Volochkova’s remarks will pile further misery on the Bolshoi, which is still reeling from an acid attack on its artistic director Sergei Filin in January that investigators have pinned on one of the theater’s soloists.

Volochkova said while appearing on “Iron Ladies” that ballerinas told her that a senior theater official pressured them to attend parties organized for rich financial sponsors.

The official “explained to them that they would go to a certain party or banquet, and that it would continue in bed,” Volochkova said.

Volochkova said anybody that resisted the overtures was threatened with possible reprisals from the theater.

“I don’t know yet if the [theater’s] management has decided on how to react to everything that was said in the show,” Novikova said.

Volochkova was reinstated to the Bolshoi after a bitter and high-profile legal case, but has not secured any acting roles with the theater since 2004.

Earlier on Sunday, Volochkova urged Russian authorities to “intervene in events at the Bolshoi.”

“I have a question for the country's leaders,” she told the Ekho Moskvy radio station. “What needs to happen at the Bolshoi Theatre - bloodshed or war - to make them pay attention?”

Continuing the war of words raging between the various clans inside the famed theater, another principal dancer, Nikolai Tsiskaridze, cast doubt on the seriousness of Filin’s injuries during the same NTV show featuring Volochkova.

A hooded assailant threw acid into Filin's face on January 17 in Moscow and fled the scene, leaving the artistic director with third-degree burns to his face and eyes.

Three men have been arrested in connection with the attack, including the theater’s solo dancer Pavel Dmitrichenko, who the police suspect of masterminding the attack.

The Bolshoi slipped into chronic decay amid the economic turmoil of the 1990s that succeeded the collapse of the Soviet Union. In recent years, the government has invested heavily in restoring the theater's luster and its annual budget has now reached around $120 million.

The rush of cash has ensured the return of lush production, but has also turned the Bolshoi into a venue of vicious infighting.

In January, Tsiskaridze, who lost out to Filin for the job as the Bolshoi’s artistic director in 2011, accused the theater’s management of a pursuing a “persecution” campaign against him and other “unwanted” figures.

While denying any involvement in Filin’s attack, Tsiskaridze insisted he would never leave the theater and that he was willing to take the helm should he be offered the opportunity.