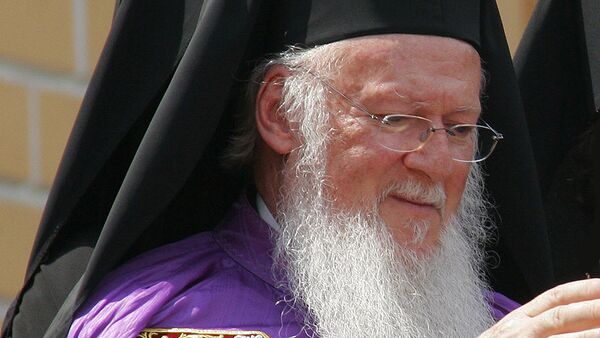 A Constantinople patriarch will attend pope’s inaugural mass for the first time since the Great Schism between the Western and Eastern churches, Vatican Radio said.

MOSCOW, March 16 (RIA Novosti) – A Constantinople patriarch will attend pope’s inaugural mass for the first time since the Great Schism between the Western and Eastern churches, Vatican Radio said.

The presence of Istanbul-based Ecumenical Patriarch Bartholomew I, who is regarded as the spiritual leader of the world’s Orthodox Christians, at Pope Francis' official Inaugural Mass at St. Peter's Square on March 19, is widely regarded as a sign of further improvement in relations between the two churches.

Bartholomew I earlier welcomed the election of Pope Francis with a warm message of congratulations.

"I want to express the hope and the certainty that the Holy Father will contribute to the peace of an already battered humanity, the poor and the suffering," he said.

The Ecumenical Patriarch of Constantinople, who shared friendly relationships with John Paul II and Benedict XVI, said that newly-elected Pope Francis “will give a new impetus to the two Churches' journey towards unity.”

The East–West Schism, sometimes known as the Great Schism, is the medieval division of Chalcedonian Christianity into Eastern (Greek) and Western (Latin) branches, which later became commonly known as the Eastern Orthodox Church and the Roman Catholic Church respectively.

Relations between East and West had long been embittered by ecclesiastical differences and theological disputes, including the source of the Holy Spirit ("filioque"), whether leavened or unleavened bread should be used in the Eucharist, the Pope's claim to universal jurisdiction, and the place of Constantinople in relation to the Pentarchy.

Efforts were made in subsequent centuries by Emperors, Popes and Patriarchs to heal the rift between the churches. However, a number of factors and historical events worked to widen the separation over time.

The relations between churches eventually showed signs of improvement, especially after the Second Vatican Council, known as Vatican II, when Pope Paul VI and Orthodox Patriarch Athenagoras voiced a joint expression of regret for many of the past actions that had led up to the Great Schism in the Catholic-Orthodox Joint Declaration of 1965.

Patriarch Bartholomew I, who was elected as the 273rd Ecumenical Patriarch of Constantinople in October 1991, visited the Vatican for the first time in June 1995.

John Paul II was the first pope since the Great Schism to visit an Eastern Orthodox country – Romania – in May 1999.