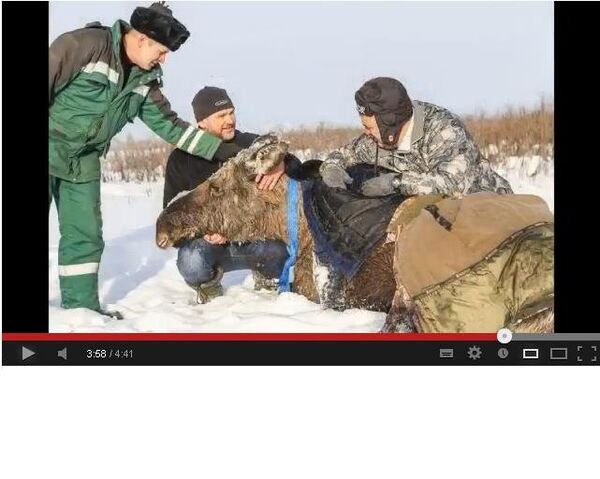 © Youtube.com
Subscribe
Would you be willing to give a moose cow a massage if it was a matter of life and death for her?

MOSCOW, March 7 (RIA Novosti) – Would you be willing to give a moose cow a massage if it was a matter of life and death for her?

The answer was “yes” for the pilot and passengers of a helicopter flying over the Siberian taiga in Russia’s Khanty-Mansiisk autonomous district, who spotted an animal that had fallen into a frozen lake through cracks in the ice and decided to try to save it.

The cow spent up to 20 hours in the water, judging by ice growing back around the crack through which she fell, according to one of the videos about the incident uploaded to YouTube.

But the moose was spotted from a helicopter flying overhead, whose pilot and two passengers rushed to the rescue when they realized the cow was still alive, the helicopter company, Uralhelicom, said on its website.

A 30-minute rescue operation saw the trio pull the 600-kilogram (1,300 pound) animal – which turned out to be a pregnant female – out of the swamp and onto the ice, grunting with effort.

Then came the hour-long massage intended to restore the animal's blood circulation. The rescuers also wrapped the moose in their jackets for warmth.

“Get her moving, she’s got cramps in her legs,” one of the men can be heard saying in the video as his taciturn fellows start rubbing the animal’s legs that tremble from the cold.

The camera’s battery didn't last through the ordeal, leaving the rescuers to document the operation’s finale by snapping pictures.

But it was a happy ending: The animal eventually warmed up enough to lumber away on its own without the jackets, tagged with a blue ribbon around its neck, the original video’s uploader, Andrei Merzlyakov, wrote in comments on YouTube.

The beribboned cow – given the homely name “Manka” in the video – was spotted in the wild five days later in good health, Merzlyakov wrote on Wednesday.

The rescuers hope to be able to film the calf’s birth later this year, he added.

The incident took place in late February, but the videos were only uploaded last week and not picked up by local media until late Monday. Daily temperatures in the area near Lake Arantur, where the incident took place, stood at minus seven degrees Celsius at the time, according to the Gismeteo.ru weather forecaster.