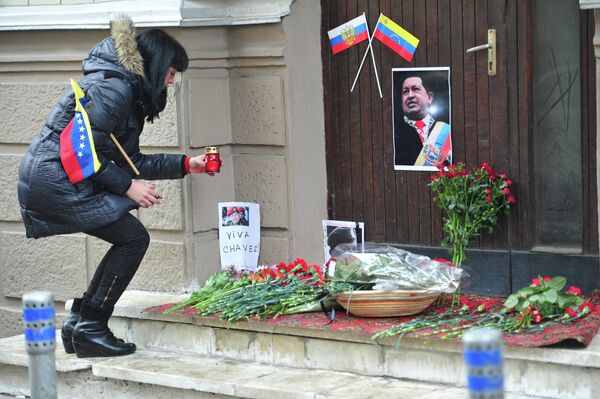 © RIA Novosti . Aleksey Kudenko
/
Go to the mediabank
Subscribe
International
India
Africa
World leaders have been reacting to the death of Venezuelan leader Hugo Chavez, the populist figurehead of Latin American socialism whose larger-than-life personality split both international and domestic opinion, with Russian President Vladimir Putin among those praising his legacy.

MOSCOW, March 6 (RIA Novosti) - World leaders have been reacting to the death of Venezuelan leader Hugo Chavez, the populist figurehead of Latin American socialism whose larger-than-life personality split both international and domestic opinion, with Russian President Vladimir Putin among those praising his legacy.

“He was an unorthodox and strong person, who looked to the future and always set himself the highest standards,” Putin said in a Kremlin message of condolence after Chavez’s death on Tuesday following a prolonged battle with cancer.

Putin added he was confident the Venezuelan people would be able to overcome what he called the “test” presented by Chavez’s death and continue to build a “strong, independent and prosperous” nation.

Ties between Russia and Venezuela flourished under Chavez, whose 14-year-rule brought Moscow a number of lucrative arms deals and a close ally in South America.

Russian Prime Minister Dmitry Medvedev said Chavez had devoted his life to the battle for "justice and equality."

"We share the pain of your loss - we will always remember this wonderful person, patriot and citizen," he said in a message of condolence to the Venezulean people.

US President Barack Obama - whose country was frequently the subject of Chavez’s ire - was much more lukewarm.

“At this challenging time of President Hugo Chavez’s passing, the United States reaffirms its support for the Venezuelan people and its interest in developing a constructive relationship with the Venezuelan government,” Obama said.

“As Venezuela begins a new chapter in its history, the United States remains committed to policies that promote democratic principles, the rule of law, and respect for human rights,” he added.

Former US President Jimmy Carter said in a statement that Chavez would go down in history “for his bold assertion of autonomy and independence for Latin American governments.”

United Nations Secretary-General Ban Ki-Moon said simply he was “conveying condolences” to Chavez’s “family and the people of Venezuela."

British Foreign Secretary William Hague said: "I was saddened to learn of the death of President Hugo Chavez today. As President of Venezuela for 14 years he has left a lasting impression on the country and more widely.”

In Cuba, the government said in a statement that Chavez had "stood by Fidel [Castro] like a true son."

Brazilian President Dilma Rousseff said: "This death should fill all Latin and Central Americans with sadness," adding "Hugo Chavez was without doubt a leader committed to his country and to the development of the people of Latin America." She described Chavez as “a great leader, an irreparable loss and above all a friend of Brazil.”